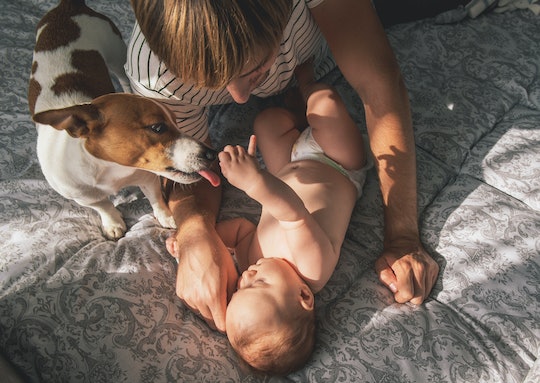 Here's Why Dogs Are Obsessed With Babies' Poop, According To Science

Most family dogs seem to understand babies, and they're more than happy to make friends with the newest member of the pack. It's adorable... for the most part and until you go to change your little one's diaper. Suddenly, you're wondering why dogs are obsessed with babies' poop and how you can get this infatuation to stop. While it may seen like a deliberate gross-out move, your dog isn't just trying to be super disgusting every time he sniffs intently at the Diaper Genie.

More Like This
The Cutest 4th Of July Outfits For Babies, Toddlers, & Kids
Here's What You Need To Know If (When) Your Baby Eats Sand
The Best Dehumidifiers For Every Space In Your Home
How To Celebrate Pride As A Family

There are several possible biological reasons the family dog is so weirdly focused on your baby's poop. Coprophagy, or the eating of poop, is a part of normal mom dog behavior, according to Embrace Pet Insurance. Basically, mother dogs will eat the puppies' poop to keep the den clean and reduce the number of smells that could draw predators. Maybe your dog really sees the infant as a puppy who needs this kind of care? That's a pretty cute reason for their arguably gross behavior.

Then again, the whole thing could be a survival mechanism. Corophagia "may be one of several appetitive survival behaviors that have evolved to cope with the periodic adversity of starvation,” said animal behaviorist Steven R. Lindsay, according to the American Kennel Club. In other words? They may be drawn to the poop because it's a potential food source. (And with the price and quality of many modern dog foods, that's kind of insulting, right?)

On the other hand, dogs are drawn to poop of any animal. You've probably seen dogs snack on a cat turd from time to time, right? The fact that your baby happens to poop in a diaper doesn't seem to make a whole lot of difference to the dog. Poop is poop. It may have a lot to do with the dog's incredible sense of smell, too. Dogs can have 300 million smell receptors in their snouts, whereas the humans nose only has about 6 million, according to NOVA. In other words, they experience smells on a whole other level. But the exact reason dogs are so focused on what humans consider unpleasant and stinky smells is still a mystery.

Reasons aside, is there anything you can do about your pooch's poop obsession? I mean, it's uncomfortable to have the dog come sniffing around every time your kid drops a bomb. Animal experts have a few suggestions you can try. First, it's helpful to train your dog on a "leave it" cue, as noted in Dogster. This command tells your dog to drop whatever he or she is interested in and go about their business. Over time, hopefully, they'll focus on less disgusting things.

You may even want to consult a vet to make sure your dog's diet doesn't have any deficiencies. Sometimes the drive to obsess over — and attempt to eat — poop may come from a real feeling of hunger. "[O]ftentimes when dogs eat poop, it’s a nutritional issue. Particularly, if you feed them lower-quality dog food with fillers like carbs and sugar, this gives the dog an energy spike, but then they’re hungry again right away," said dog behavior expert Cesar Millan in Parade. It's possible that feeding your dog a more nutritionally dense food would help end this behavior.

As always, if you're especially concerned about your dog's behavior, don't hesitate to reach out to your vet for advice. Having a baby changes everything, including your dog's life, but you can call on expert help whenever you need it.

Oh, and if you feel totally alone in this problem, take heart and know that many dog owners have faced this particular problem. There are numerous anecdotes of babies eating dog poop out there, in addition to the wealth of stories about dogs eating baby poop. It looks like both of these little creatures have a serious disgusting streak. But even if they do gross you out the door from time to time, you can't help but love them.