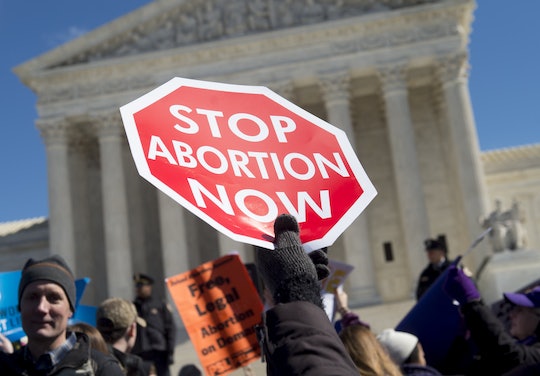 Why Are Fetuses Worth More Than The Women Carrying Them To "Pro-Lifers"?

One of the many things that Americans are worried about as President-elect Donald Trump's inauguration nears is the way Trump's administration will almost certainly make it more difficult (if not impossible) for women to access safe, legal abortions in their home states. There's no question that the issue of reproductive rights is an incredibly controversial one for many people, and Trump's clear pro-life position was likely something that influenced many voters on Election Day. But given pro-life advocates' strong focus on protecting the rights of unborn fetuses, it seems they are ignoring one very important question: why are fetuses worth more than the women carrying them?

I doubt that most "pro-life" or anti-abortion advocates would consider that, in standing against abortion, they are valuing the fetus' rights over that of women, but when you take away the associated arguments about religion and morality, that's more or less exactly what the debate comes down to. By being open to the idea of repealing Roe v. Wade through his Supreme Court appointments, according to Newsweek, Trump — and those who support his decision — is giving license to the idea that, when all is said and done, what matters more than the women's needs is the sense that her fetus has a right to life, regardless of the circumstances, or the consequences that that right could have on both of them.

The fact is, of course, that as it currently stands, Roe v. Wade asserts that the interest of protecting a potential human life does not get to supersede a woman's Fourteenth Amendment rights — ensuring a woman's right to privacy, which includes her right to terminate a pregnancy — and that a fetus is not a person and thus, does not have Constitutional rights, according to PBS. After gestational viability, or the point at which, medically, a fetus is considered to have a reasonable chance of survival outside of the womb, Roe v. Wade allows room for restrictions on abortion, and, unsurprisingly, those restrictions have been up for debate ever since. But beyond the legal and scientific definitions, it's still difficult for many anti-abortion people to differentiate a fetus from a healthy, happy, adorable little baby that is loved and wanted and could go on to have a perfect, wonderful life.

As the mother of two children born extremely premature at only 25 weeks — not much further than the point of viability — I can sincerely understand that viewpoint. When I was admitted to hospital at 24 weeks with threatened pre-term labor, the doctors told my husband and I that, since our twins were just barely considered viable, they would ultimately leave it up to us to decide whether we wanted them to be resuscitated after birth and subjected to all the medical intervention required to give them a shot at life, including being placed on ventilators to compensate for the fact that their lungs weren't developed enough to actually breathe. Otherwise, they told us, they could make them "comfortable," until they would inevitably die not long after birth.

It's the kind of conversation no parent desperately wanting to give birth to healthy, happy, adorable little babies ever wants to have, and it still haunts me to this very day. Our decision was clear: we wanted our twins resuscitated, and after four months in the NICU, two brain surgeries, and many, many sleepless nights, our babies came home from the hospital. But we learned the hard way that viability does not even sort of guarantee anything. We learned the hard way that many babies, often at a further along gestation than ours were, still died. And many who didn't were left with severe, life-long disabilities as a result.

As a mother who loves her children, and who fought so incredibly hard to get to keep them, who prayed that they would live and be OK, and who saw other parents lose their own premature babies, I understand why the thought that anyone could willingly terminate a pregnancy feels abhorrent to some people. But I also know that that perspective — the one that assumes that all babies have the potential for amazing lives and should be born no matter what — is also incredibly myopic, and is one that ignores so many other realities that are just as, if not more, important.

Legislating a woman's reproductive rights automatically puts her a position where she has less autonomy over her own body and choices simply because a fertilized egg managed to implant itself into her uterus. In a way, any woman who has ever been pregnant knows that this sudden loss of control over her body happens anyway: it happens when we tell pregnant women what they shouldn't eat, what they can and cannot do, how they should act, what they should wear, how much weight they should or should not gain, and how they should feel. It happens when strangers feel like they have the right to touch a pregnant woman's belly when it's clear they would never do such a thing to a non-pregnant woman. Suddenly, that belly is no longer hers, it's her baby's. And whether it's something we're collectively aware of or not, it's an idea that's culturally pervasive. Before pregnancy, you were a woman. Once you are pregnant, you are a vessel.

If you are a woman who got pregnant on purpose, and who is equipped to give birth and raise your child knowing that you have the support, finances, maturity, and emotional capability to provide for them, then maybe that new designation never bothered you (or maybe you just never noticed). And honestly, lots of parents who aren't equipped with any or all of those things still go ahead and have babies, and they probably don't mind the vessel terminology either. But that doesn't change the fact that being pregnant means that, suddenly, other people get to make decisions about what they think is best for you. And nobody knows that better than someone who needs to or wants to terminate their pregnancy.

Restricting abortion access is, at its very core, another way in which our society is designed to tell women that they don't matter. It's another way in which women are told they are not capable of making the best decision for themselves — that there are choices about their own bodies that other people know more about than they do. It's about telling women that the fact that, biologically, they are capable of carrying and birthing children means that they are inherently also expected to love and care for those children, to sacrifice for those children because it is what women are supposed to do, even though it is only very recently that we've expected men to do the same.

Restricting abortion access is about letting women know that, even if they might know, very clearly, that they cannot actually give the child they are carrying a good life, they still shouldn't be allowed to make that choice. And it's about telling them that, even if getting pregnant and being a mother will permanently impact their life in a way they do not want, they should still have to live with it. No second chances. Make your bed and lie in it.

Given the complicated way that notions of sexual purity have been weaved into womanhood for decades, those implied messages are not entirely surprising. To walk around as a pregnant person is to announce to the world that you've had sex, and there seems to be nothing more that we seem to enjoy as a culture than to shame women for being sexual. Girls are taught that having sex makes them sluts, but that not having sex makes them prudes. Abstinence-only sex education is still heralded by many as the gold standard for raising kids right, because married sex is the only kind that isn't dirty or shameful. And when a woman gets pregnant unintentionally, or when a woman chooses to have an abortion for a non-medical reason, there will always, always be someone there to remind her that she should have kept her legs closed, or that "abortion isn't birth control," as though she honestly thought having an abortion would be more enjoyable than going on The Pill.

The fact that many religious denominations consider abortion to be wrong or sinful certainly doesn't help matters, but in most cases, those denominations are also steeped in the same kind of deep patriarchy that has influenced many of our widely-held societal views. And yes just as many women as men oppose abortion on moral or religious grounds. But make no mistake, the pro-life movement is, at its core, a misogynistic one. The fact that it also happens to involve something that could eventually resemble a sweet, snuggly newborn is, in many ways, a convenient distraction — another way to sell people on the merits of legally restricting what women can and cannot do, the choices they can and cannot make.

You don't have to be in favor of abortion to realize that de-funding Planned Parenthood, as Vice President-elect Mike Pence has pushed to do, according to The Telegraph, or repealing Roe v. Wade is inherently about restricting women's rights. In fact, I would argue that finding people who are actually in favor of abortion would be almost near impossible. Those who are against restrictions on abortion access are almost always against it because of the way it would affect women, the way in which it keeps women from making important, private, medical decisions that will monumentally alter the course of their lives forever. While I don't anticipate ever choosing to terminate a pregnancy myself, and while I would certainly be devastated if I ever had to, the fact remains that the notion of making it illegal (or even more difficult) for another woman to do so after she has decided that it is what she needs to do is stomach-churning. Why should anybody have the right to do that?

Of course, it's unlikely that any deeply-held opinions about reproductive rights are going to be changed magically overnight, and in all fairness, they don't have to be. But if we are going to have this debate — if we are going to make these decisions that have huge impacts on other human lives, including the fetuses which may end up turning into babies born to parents who are incapable of providing them with loving homes, or, worse, a parent who may subject them to abuse or neglect — then we need to be looking at the entire issue, all aspects of it, with our eyes open. The view that abortion "kills babies" isn't one that is inherently invalid or that should be ignored — the ethical implications of course matter. But it's only one small part of a much bigger conversation about women's rights, the Constitution, and why it is that so many people think it's OK to treat pregnant women like their opinions are less valid. And that's a conversation that desperately needs to be had.