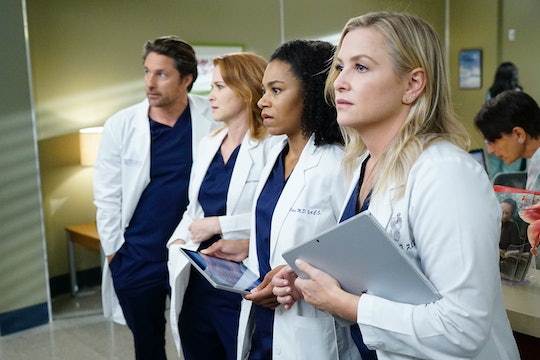 These Two Fan Favorites Are Leaving 'Grey's Anatomy' After Season 14

One of ABC's most successful and most beloved dramas has seen its fair share of cast shakeups. Longtime fans of Grey's Anatomy have watched as character after character left the series. So with the latest announcement of cast departures of the actresses behind Dr. Arizona Robbins and Dr. April Kepner, many are wondering why Jessica Capshaw and Sarah Drew are leaving Grey's Anatomy. Well, it seems as though there aren't too many details out yet, but the age-old "creative differences" might just be the case here.

Sadly, Dr. Arizona Robbins and Dr. April Kepner will be leaving Seattle Grace after the current season, per multiple news reports. As Deadline reported, Capshaw and Drew will be officially leaving the show after Season 14 draws to a close. But it also appears that the two actors are the only ones parting ways. Per Deadline, "Sources say Capshaw and Drew will be the only series regular members of Grey’s large ensemble cast to depart this year."

Both Capshaw and Drew, as well as creator Shonda Rhimes, have released statements about their departure from the medical drama, all three women expressing remorse at the characters saying goodbye, but not entirely explaining the precise details behind the decision to leave the show.

As Drew explained in a statement released to her Twitter account, "Hey guys," she started, "Thank you for all of the love. I know you’re sad. I’m sad too. I haven’t really had the time to process this information."

She continued, "I’ve been with it for less than 48 hours, so I’m not ready to say my thank yous and give an all encompassing statement about my 9 years here. That will come later. For now, I’d like to say: I love you, and I love April, and her story isn’t over yet." She added:

And the really good news (for me, at least) is that I’m here on set shadowing one of my favorite people, Kevin McKidd, with my beloved Grey’s family all this week and next, so I get to process all of my feelings surrounded by the community that has nourished and nurtured me for almost a decade. For that, I am grateful.

So, as Drew's statement suggests, she herself was only recently informed about the decision to let her go. As Deadline reported, "The decision was made by the producers who at the start of each season have to formally pick up the option of each regular cast member."

Rhimes echoed Capshaw's sentiments with her own statement, explaining, "Both Arizona Robbins and April Kepner are not only beloved but iconic-- both the LGBTQ and devout Christian communities are underrepresented on TV."

While the explanations totally make sense and it seems as though everyone involved is sad to see April and Arizona leave, fans are still pretty crushed by the news.

Clearly, it doesn't matter what explanations are given, it seems that die-hard fans of Grey's Anatomy will never fully accept that two more favorite characters, and lead characters no less, will officially be leaving the series. To count, there have been 175 character deaths in Grey's Anatomy, and that's not counting the characters who have simply left. Now, Arizona and April will be joining that list, though it's unclear how their characters will leave.