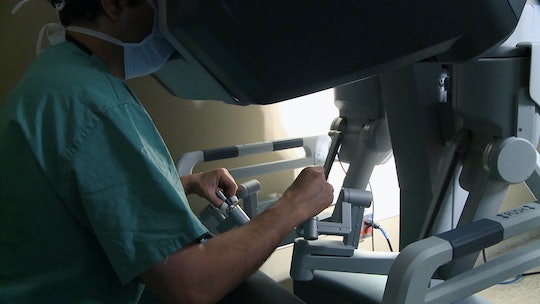 'The Bleeding Edge' Questions The High Cost Of Medical Devices

High healthcare costs are a point of contention in practically every political debate in today's era. Netflix’s new documentary, The Bleeding Edge, investigates one major healthcare expense — medical devices. The doc covers the medical device industry, which has benefited from weak regulations and by selling their products at extremely high prices. So why are medical devices so expensive? It’s all about the profit.

The Bleeding Edge documents the complications and high costs of a variety of medical devices, including metal hip replacements, the Essure birth control coil, and transvaginal mesh. In one segment, a woman who received a vaginal mesh revealed that the device had actually melded with her organs, causing intense pain and bleeding. Her physician said the mesh was akin to “bubblegum stuck in hair” and she would need extensive surgery to get it out. Not only did the patient pay for this mesh with her health, but it also came with a huge price tag. In the film, an obstetrician talks about the price of controversial device, stating, "It costs about $25 to bring to market, and they sell for about $2,000 bucks a pop.”

In a 2012 report, the U.S. Government Accountability Office (GAO) found that another big reason for the high costs of certain medical devices is the lack of transparency. The report, titled Lack of Price Transparency May Hamper Hospitals’ Ability to Be Prudent Purchasers of Implantable Medical Devices, looked into the purchase history of 60 hospitals, and found that some hospitals were paying far more for the same device than others. But because hospitals’ confidentiality clauses prevent them from price sharing, the report found many manufacturers can charge much higher prices, which ultimately land on the shoulders of the patients.

The GAO also found that your doctor’s preference in medical device, like the brand or model, could also impact the costs. “Although physicians are not involved in price negotiations, they often express strong preferences for certain manufacturers and models of implantable medical devices (IMD),” the GAO noted, “To the extent that physicians in the same hospital have different preferences for IMDs, it may be difficult for the hospital to obtain volume discounts from particular manufacturers.”

Unlike many other countries, the healthcare system in the United States involves many middlemen and monopolies. A report by the New York Times revealed that there can be up to 13 levels of vendors between a device manufacturer and patient, including brokers, billing companies, and purchasing consultants. So when everyone in the middle is looking for a profit, the cost of medical devices can skyrocket.

The same NYT report highlighted the story of Michael Shopenn, a man who traveled to Belgium to save $65,000 on his hip replacement, which ultimately only cost him $13,660, including his artificial hip joint, surgery, the hospital stay, rehab, and his round-trip airfare from the United States. The cost of manufacturing a hip joint in the U.S. is approximately $350, the outlet noted, but patients can be asked to pay almost $40,000 for the same device.

As a patient, it’s a good idea to stay informed about the medical devices you may have or need. If your doctor is suggesting a device, go ahead and ask about the costs, the risks, and the alternatives. You could also refer to the Federal Drug Administration’s (FDA) Division of Industry and Consumer Education (DICE) to learn about specific FDA approved medical devices. Not everyone can travel to Belgium for a procedure, but you can make yourself an informed consumer, so that you know exactly what you and your pocket are getting into.