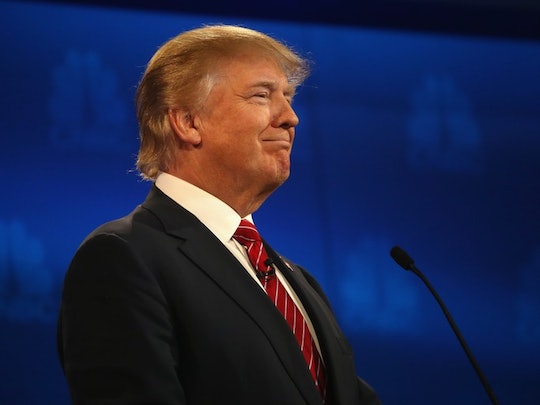 Real estate mogul and reality television star Donald Trump has been leading the overall GOP field nearly since the moment he announced his presidential bid. That may not be surprising, considering Trump’s celebrity status and populist message. But what is surprising is that despite a history of nasty remarks against women — from his ugly public feud with Megyn Kelly to his chauvinist remarks about fellow candidate Carly Fiorina — a growing number of Republican women are supporting Donald Trump. A CNN/ORC poll released last month showed that the Republican frontrunner is leading with female voters by as much as 13 points compared to the other candidates. More than that, Trump’s numbers among female and male voters have actually gotten better since the summer, according to CNN, rising from 20 percent in August to 33 percent the following month — and that’s after Trump’s many anti-feminist rants on and off Twitter.

So, why are more GOP women drawn to Trump-mania? Are Trump-ettes, as Trump calls his female supporters, simply ignoring the nastiness (and the fact that he refers to them as anything “-ettes”? Or are they being wooed by his stick-it-to-Washington message? To say that Republican women voters are somehow flawed or misguided is too convenient—and pretty insulting. No, the frightening truth is that Donald Trump is saying what some women voters want to hear.

I’ll admit that some women’s reactions to Trump’s statements has me puzzled, too. Conventional wisdom has always been that when candidates make rude, hurtful, or condescending statements to voters, voters retaliate by taking back their support. Not so with Trump. And as MSNBC’s Aliyah Frumin pointed out, it’s not just Trump’s openly harsh treatment of women that should be turning off female voters, it’s his entire political stance:

QUOTE: It’s all a bit baffling. Not only does Trump say sexist things, but his invariably macho stance on everything from foreign policy to immigration is the sort of testosterone-fueled bravado that typically rubs many female voters the wrong way. But with Trump, apparently, that’s not the case.

So why is Trump doing so well with women voters? It could be because women voters care more about his stance on economic issues than anything else. National Organization of Women executive director Terry O’Neill told CNN New Day recently that with more households depending on women as the sole or primary breadwinner, Trump’s health care and employment messages are making sense. O’Neill weighed in:

QUOTE: I think the surge in women’s support for Trump reflects their real concerns about their families’ finances. […] The reality is that two thirds of min wage workers are women. These are workers who don’t get health care benefits and they’re working at poverty wages. So, women across the country are very much aware of the economic insecurity that many of them face. And part of the reason why the min wage hasn’t gone up is because too many politicians are enthralled to too many corporate forces that want to keep the minimum wage low.

Another reason female voters are standing with Trump has to do with what the candidate is saying about illegal immigration. His cavalier comments about building a wall along the border of Mexico — and making Mexico pay for it — have many critics questioning whether or not Trump really gets what that would entail (billion dollar price tag and murky logistics aside). But according to CNN, 52 percent of Republican women say the immigration issue is “extremely important” — even more so than Republican men. And apparently, Trump’s argument for how to resolve it seems to be resonating.

Then there’s the other, perhaps more interesting side to the coin: Some say Republican women who are backing Trump are doing so in a kind of revolt against “Democratic feminism.” As Catherine Rymph, author of Republican Women recently told CNN:

Although there was once a strong component of feminism and women's rights advocacy within the GOP, feminism is now strongly associated with the Democrats. So voters, including women, who don't like Democratic feminism or so-called 'political correctness' in general may very well find refreshing Trump's delight in using language about women that many find offensive.

The GOP has struggled to connect with women voters in past elections. And with the prospect of a third Democratic administration, with the nation’s first female president at the helm, it’s never been more critical for the GOP to attract—and keep—the attention of its female base. That’s why Donald Trump’s popularity poses such a risk. Republican strategist Katie Packer recently shared her take on the GOP’s Trump problem with CNN:

He is a bully and he is obnoxious and he is all things that women don't really want in a husband in an employer or their president. But there is a segment of Republican women who will put up with anything, as long as they have someone who will 'tell it like is,' because that's all they care about. He is doing well among the women that we already get.

While the party’s leading candidate may not be winning over undecided voters, the Republican women who support Donald Trump seem to have their own reasons for doing so. Ohio voter Michelle Letner told Frumin that she donated $225 to Trump’s campaign, making this the first time she’d been moved to donate to any politician. “I like that he’s not politically correct,” said Letner. When asked about Trump’s history of name-calling and bashing women, Letner said, “I have no problem with a man being a man. I like him because he’s real. He’s saying it like it is. If you want to be treated like a lady, act like a lady.”