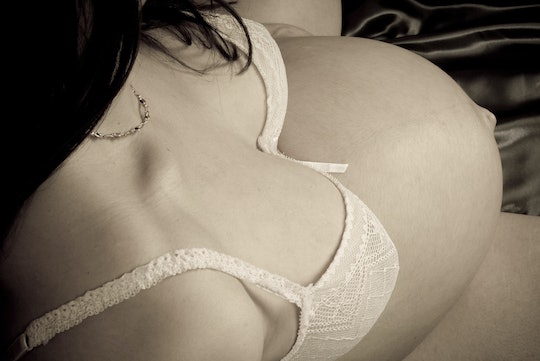 Why Are My Breasts Leaking During Pregnancy?

You may have a hunch you're pregnant when you notice some changes in your breasts. Tenderness and swelling might be no surprise, but you may be caught off guard later in pregnancy when more changes start to occur. Like when you look down at the wet spots on your shirt and wonder why your breasts are leaking during pregnancy. It can be startling to say the least, but it's just your body's way of saying it's preparing to feed your baby. Although this is a very common part of pregnancy, many first time moms are surprised when it happens to them.

It's not just breastfeeding that puts your boobs to work. Those months leading up to delivery can cause a good amount of changes. According to the American Pregnancy Association, your pregnancy hormones can cause breast changes. Expect to see darkening of the areola and veins on your breasts, as well as enlargement and increased sensitivity as your pregnancy progresses. All these things are just part of the process to get you ready to feed your baby. Which is also the reason your breasts are starting to experience leakage and — spoiler alert — this is only the beginning.

As your body is building up its milk supply, a little pre-milk can start to eek its way out. According to Healthline, the first stage of breast milk, known as colostrum, starts to produce during your second trimester. This is what many mothers refer to as liquid gold, since it is what your baby will take in during its first few days of life outside the womb. Typically, colostrum looks like a thin, yellowish liquid that is expressed from the nipples, as the website for What To Expect reported. If the leaking is a continuous issue for you, try picking up a few nursing pads at a drug store to absorb the fluid and stop it from leaking through your bra and on to your clothes, as Baby Center suggested.

Although most women start to experience breast leakage around the third trimester, it's possible for some women to notice colostrum earlier on in her pregnancy. As Fit Pregnancy magazine pointed out, a pregnant woman's body starts to make colostrum around 14 weeks, but some women have noticed this liquid coming from their breasts earlier than that. Even though it may only be a few drops here and there, some women have seen the signs as early as the first trimester.

Your body goes through some crazy thing while you're making a human. But before that little bump becomes your precious bambino, you may have to endure some of the more unpleasant symptoms of pregnancy, such as dealing with leaky breasts. But once you see that sweet face you've been dreaming of, all those moments spent drying off your nipples and changing your shirt will be worth it!