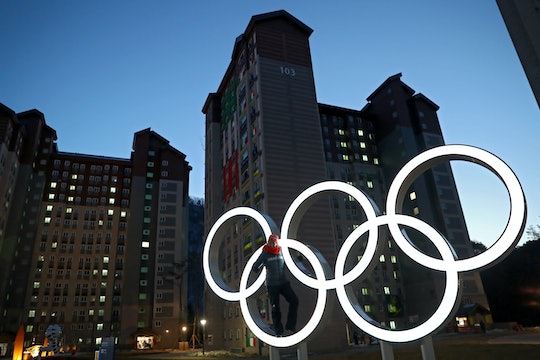 Not only will the two countries' female ice hockey teams compete together, but athletes from both nations will be marching together under the same flag during the Olympics' opening ceremony. The moves were announced by South Korea's unification ministry, according to CNN, after the two countries carried out extensive talks at the demilitarized zone that sits as a buffer between the nations' borders.

Skiers from the two countries also trained together at a resort in North Korea prior to the Olympics, following the talks that began in early January, according to Reuters. During the Olympics, North and South Korea will also be putting on cultural performances as a unified team.

South Korean President Moon Jae-in first floated the idea of the two Koreas competing together back in June 2017, according to The New York Times, when he said during a speech: "I want to see the same glory again. I want to feel the same Olympic sensation."

Apparently, according to The New York Times, the idea of the two Koreas competing together makes sense for a couple of reasons. First of all, despite the rifts between the two countries, one Korea will cheer for the other when it competes against other countries — especially a nation like Japan, which used to rule over Korea as a colony.

Competing as a unified team also gives both countries a chance to cooperate with one another, bringing the strongly divided Koreas slightly closer to reconciliation. "Sports are a powerful tool to demolish walls and separation," Jae-In said in that same speech, according to The New York Times.

However, while the intentions are good, experts are hesitant to call it a diplomatic breakthrough. The two countries have cooperated together for sports events in the past — including the 2000 Olympics in Sydney, where they marched under the Korean Unification Flag — but there are still many issues that stand between the two countries.

"Both Koreas are primarily utilizing the talks for a limited objective — arranging the participation of a North Korean delegation in the Pyeongchang Winter Olympics," John Park, the director of the Korea Working Group at the Harvard Kennedy School, told CNN recently.

As for the issues that keep them apart? North Korea has shown little interest in denuclearization, according to NBC News, with leader Kim Jong Un warning in January:

The entire United States is within range of our nuclear weapons, a nuclear button is always on my desk. This is reality, not a threat. This year, we should focus on mass-producing nuclear warheads and ballistic missiles for operational deployment. These weapons will be used only if our society is threatened.

The cooperation between North and South Korea for the Olympics is no small thing, to be clear. But when it comes to remedying the long-standing issues that sit between the two countries, it's going to take a lot more than marching beneath a unified flag at the 2018 PyeongChang Olympics.

In the meantime, however, North Korea's cheerleaders have already arrived in PyeongChang, and Un's sister is set to join the delegation in South Korea. All of that is a step forward in relations between the two countries — and hopefully, it's one that will lead to further progress in the future.