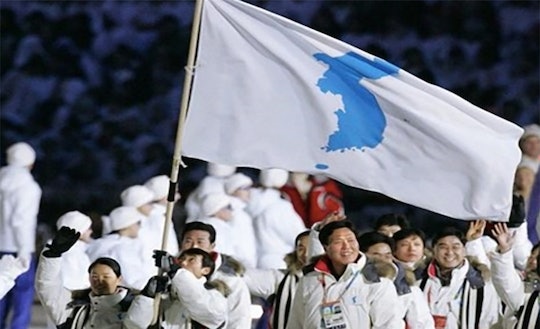 In early January, North Korea announced its decision to participate in the Winter Olympics in PyeongChang, South Korea, according to The New York Times. The news made headlines for a number of reasons, but especially because North and South Korea are often at odds with each other, to put it mildly. But as surprising as the decision is, what's even more unexpected is that North Korea and South Korea will walk together at the opening ceremony on Friday. So, what's up with this seemingly random display of unity? Well, as most situations with North Korea often are, it's complicated.

North Korea's involvement in the Winter Games is spotty at best. The last time North Korea participated in the Winter Games was 2010, according to Vox, and many people didn't think the nation's controversial leader, Kim Jong Un, would collaborate with his frenemies in South Korea just so North Korea could attend the 2018 Pyeongchang Games. But Kim Jong Un is an unpredictable character who generally likes to keep his enemies guessing, which is why I suppose this partnership isn't too strange when you really think about it.

North and South Korean officials met in January to hold joint peace talks, the first of their kind since 2015, according to CNN. It was during these talks that North Korea and South Korea agreed to team up at the 2018 Olympic Games.

North Korea's chief delegate, Jon Jong-su, said at the meeting, according to The Guardian:

Inter-Korean relations have been strained for almost 10 years. We hope that ties can open.

NPR reporter Elise Hu elaborated on the Army of Beauties, revealing, according to NPR:

Cheering squads are typically made up of college-age students and volunteers ... the two Koreas agreed that a North Korean orchestra, singers and dancers would come to the South to perform during the games.

And all of this good will culminate in North and South Korea walking under the Korean unification flag, which depicts the Korean peninsula in blue against a white backdrop, at the opening ceremony, according to Vox.

But why is this big display of togetherness happening now? North and South Korea will walk together under the pro-unification flag for two reasons:

It's A Chance For Unity

In the last month or so, North and South Korea have worked towards achieving peace with one another, something they've failed to do for decades. And what better way to demonstrate solidarity than with a joint walk at one of the most publicized events of the year, right? Plus, it's in line with a message North Korean officials sent to its people towards the end of January. The message urged Koreans to "promote contact, travel, cooperation between North and South Korea," according to CNBC. One can assume that North Korea is putting its money where its mouth is by walking alongside South Korea at the Olympics.

But is peace between North and South Korea actually within arm's reach? Probably not.

North Korea analyst Michael Madden explained, according to the BBC:

Any future interactions over other strategic issues, whether it's weapons of mass destruction or family reunions, will probably prove to be more difficult.

It's A Show Of Power

Of course, it's difficult to say if North and South Korea's showy display of unity will actually manifest in anything tangible. At this moment, it seems like the joint walk at the opening ceremony is nothing more than a big spectacle. Only time will tell, I suppose.