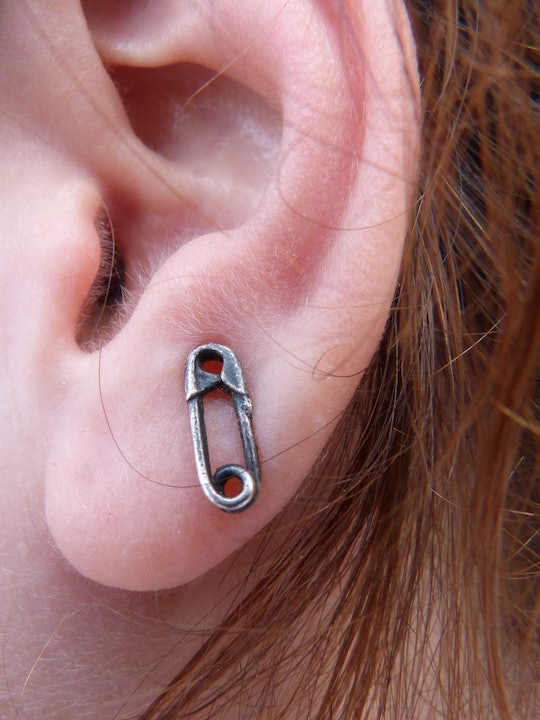 Why Are People Of Color Upset About The Safety Pins People Are Wearing Post-Trump?

Over at The Huffington Post, Christopher Keelty explained that the safety pins do little more than "making white people feel better." He argues that the pins allow white people to think of themselves as allies even though they're doing nothing to help marginalized groups.

People in the comments have defended the pins against the belief that they are a sign of white privilege. One person wrote in the comments that she didn't vote for Trump, but will "wear that freaking safety pin, proudly, without guilt," because she has family members who are gay, biracial, or have special needs. OK, from this point, I'm going to talk to the cis, straight white people out there — the "allies" who are truly defending these pins. So, wearing the pin shows support for people you know and love who are marginalized. Sure. But how does wearing the pin help your Muslim friend when she's being harassed? How does having a safety pin keep your African-American friends from being threatened with violence? It doesn't.

Other people have questioned why the pins represent white privilege because everyone, not just whites, can wear them, and, those people are seriously missing the point. The safety pins (or the fact that you were able to shell out a whopping $4 for a pack of 200 of them) aren't a privilege — your white skin is the privilege. The fact that you don't have to face taunts of "go back to your country!" that people with brown skin (whether they're immigrants or not) have had to deal with since Trump's election is the proof of your privilege. You haven't been harassed because you're gay, or black, or whatever else that makes you a walking target.

The pins are supposed to be a sign for people of color, women, LGBT people and immigrants that you are a "safe space" they can go to if they are being harassed. But what if a person in need mistakes someone wearing a safety pin as an ally when they were wearing a pin simply to hold their shirt in place? Or what about if Trump supporters start wearing the pins to pretend to be allies? And, as activists have noted, why is the sign that you're an ally so quiet? Wouldn't it be more helpful to actually, say, write, volunteer, donate, or scream that you're an ally rather than to have to search for a tiny pin somewhere on your body?

And I hate to say this. But all of this attention being paid to safety pins is a way to make an issue that will predominately hurt people of color about white people.

So if you must wear the safety pins because you believe in the message behind it, go ahead. But that cannot be where your role as an ally stops. When you see your gay or immigrant or Muslim friend being bullied, you intervene. Stand up for them. Go to protests against Trump or people who condone his rhetoric about Mexican immigrants, Muslims, and women. Taking action is the main step that actually matters to us, because it can make a difference. Because a symbol of solidarity is just that: a symbol.