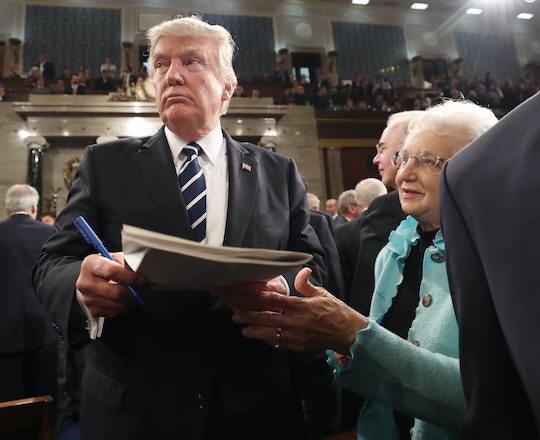 Why Are People Saying There's A "New Trump"?

On Tuesday, President Donald Trump gave his first address to a joint session of Congress. Trump's tone during the speech has been described as "measured" — a 180-degree turn from his normal bombastic and confrontational personality. The contents of the address itself, though, were classic Trump: littered with inaccuracies and false claims. So why are people saying there's a "new Trump"? The tone in which Trump delivered his first presidential address shouldn't negate — or bury — the fact that his polices haven't changed.

The president's tone Tuesday evening seemed to be an effective smokescreen for listeners. In its coverage of his address, BBC News described Trump as "a kinder, gentler president." TIME said he "finally sounded like a president." Both Democrats and Republicans took to social media to applaud Trump on his change of style (ask Trump supporters, and they'll say he was always civil). Soon after his speech, the hashtag #newTrump was born.

But the president still supports and promotes plans that will undo pro-environment policy, civil rights, and the economy. What he said in his speech, as annotated by The Washington Post, confirms as much. And people took to Twitter to remind the country — and CNN contributor Van Jones — of that.

Many were surprised by his position on immigration. During his address, Trump said he would be open to "positive immigration reform" that could grant legal status to some undocumented immigrants, according to Reuters. But in the same breath, Trump perpetuated harmful stereotypes by announcing that he would create a new agency to support victims of crimes committed by immigrants — even though, according to the National Criminal Justice Reference Service, U.S.-born citizens commit crimes at higher rates than immigrants. He is also moving forward with building a wall along the U.S.-Mexico border. And although Trump plans to delay signing his revised travel ban, which will exclude visa holders and permanent residents, he still plans to implement a travel ban in the first place.

When it comes to immigration, Trump has pulled this before. During his campaign, Trump promised to deport every single undocumented immigrant in the United States — all 11 million residents. But once he won the presidency, he scaled that number back to 3 million immigrants. Yet, in his first days in office, Trump launched an all-out attack on the immigrant population by broadening detention and deportation rules, and ordering widespread U.S. Immigration and Customs Enforcement raids across the country. The president's prone to flip-flop, and there's no reason to believe he'll promote meaningful immigration reform beyond a few flowery words in a speech to Congress.

Trump has not changed. Just read the transcript of his address. He clearly outlined his agenda — the same agenda he has been pushing for the last year. If you're fooled by a softened toned, then you're not paying attention.