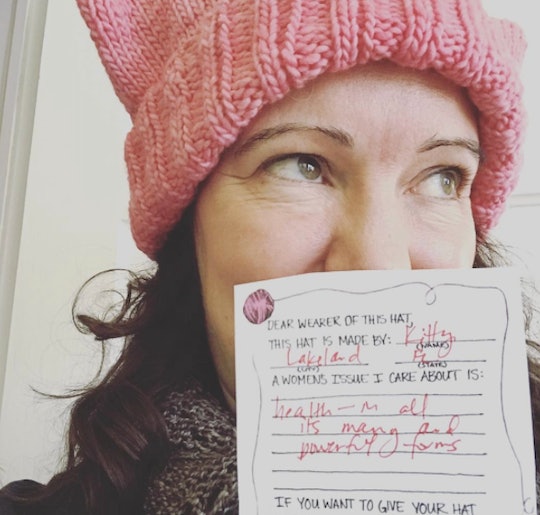 On Jan. 21, hundreds of thousands of people from across the country will head to Washington, D.C. for the Women's March on Washington to protest Donald Trump's inauguration as 45th president of the United States. Demonstrators are expected to gather across the street from the White House lawn starting at 10 a.m. in one of the first shows of dissent after Trump will have officially taken office. And it's there that attendees can expect a sea of people wearing pink cat hats for the Women's March on Washington.

The cats hats are part of the Pussyhat Project, a creatively inclined protest action launched on Nov. 22 by a group of knitters based in Los Angeles. According to BUST, the goal of the initiative is to knit 1.17 million pink, cat-eared caps for people to wear at the Women's March on Washington, as well as at local protests across the country. What a great visual — and subversive — way to say, "Hell no, Trump has got to go!"

Protestors and allies throughout the U.S. and around the globe can take part in the Pussyhat Project by knitting, crocheting, or sewing their own version of the pink cat-eared hat. The Pussyhat Project has easy-to-follow hat patterns available on their website; people can even register their completed hats so that they are tracked and promoted across social media. So far, the initiative has tracked finished projects along the east and west coasts, throughout the South, in the Caribbean, in Australia, and a few countries in Europe (not including Russia, though). Yarn stores have also started to take part in the Pussyhat Project, opening their doors to knitting parties, acting as drop-off and pick-up points for completed hats, and promoting the project itself. The pick-up points are where non-knitters can pick up hats donated to the cause by knitters.

People don't have to wait until Inauguration Day or Jan. 21 to wear their "pussyhat," though. The Pussyhat Project encourages activists and allies to wear their dissent on their head as soon as their hat is finished. Anyone posting their completed projects to social media should use the hashtag #pussyhats in their posts, as well as tag @PussyhatProject. You can also show your support by donating to the project to help the group pay for website maintenance and meet anticipated distribution costs at the Women's March on Washington next Saturday.

The next four years will be a nightmare for many groups in this country. Trump and the GOP have made policy promises that would further threaten the livelihood of people of color, transgender people, the lesbian and gay community, undocumented immigrants, and women. The Pussyhat Project is another way we can show our next president that we will not stand for it.