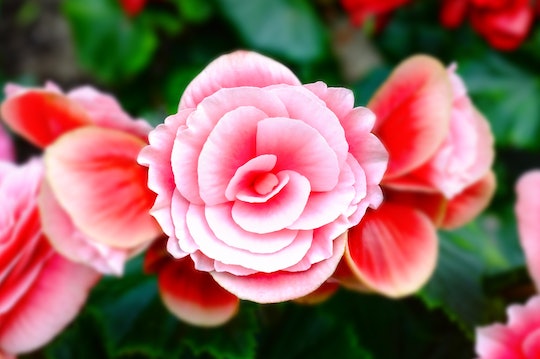 Why Are Pink & Red The Valentine's Day Colors?

With everyone's favorite candy-laden holiday right around the corner, it's time to dust off your favorite sweater with the cartoon hearts all over it. Stores are already stocked with lollipops and conversation hearts and you're practically assaulted with pink and red everywhere you go. But have you ever stopped to wonder why pink and red are the Valentine's Day colors?

When you think of Valentine's Day, red and pink are often the first colors that come to mind. But who decided that these colors symbolized love in all its romantic glory? It turns out, the color red has symbolized passion, desire, and love, for longer than you've been doling out Valentines. NPR spoke with Rebecca Stevens, curator of a 2007 textiles exhibit at the Textile Museum in Washington, D.C., who said that from the beginning of its origins, red was an expensive and illustrious dye to get your hands on. "People made their living trading this dye," Stevens said. "It was as good as gold." Because the dye was difficult to get, and expensive when you could get it, it made the color exciting, and important. In France, it became a favorite color for the rich. And in countries like Japan and Italy, it was forbidden for regular citizens to wear the color red. Red became a color associated with luxury and royalty. If you received a garment dyed red, you knew it was an expensive garment.

Of course, once synthetic dyes were introduced, the hard-to-get nature of the color died down. But the association with passion still remained. Live Science suggested that this is because the life source of all passion is the blood pumping through your veins. It's also worth noting that Roman brides wore red veils, according to author Linda Alchin. And The Guardian reported that red is still a popular color worn by many brides in China today. But perhaps the easiest and oldest connection between the color red and its connotations with love, are Greek mythology. According to legend, red roses first appeared from the blood of Adonis. And the red rose itself was dedicated to Aphrodite, the Greek goddess of love. Since then, red has taken over as the color most associated with love.

Pink came along a little bit later in the timeline. According to Reference, because pink is a combination of red and white, it's said to take the properties of both colors and intertwine them. Historically, white has represented innocence and purity. Mixed with the hot passion of the color red, it reveals a gentler kind of love in the color pink. So the next time you're feeling a little overwhelmed with all the red and pink in the Valentines aisle, just remember, they're not just commercial colors. They're steeped in historical anecdotes that you can now impart on your kids. Ah, an educational Valentine's Day lesson. How lovely.