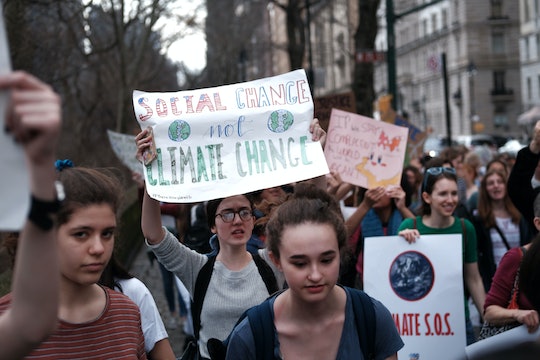 Students Are Protesting All Over The World To Demand Climate Action

When the United Nations released a report earlier this week, it stated that humans across the world are degrading the environment at an alarming rate, according to CNN, that could "endanger human health." Clearly, a change needs to happen before it's too late — and students all across the world are standing by this. If people were wondering why students were protesting all over the world on Friday, then they should know that it's for one main reason — to call for politicians to help save our planet before it's too late.

Students all around the world — from the Philippines, to South Korea, to cities all across the United States — walked out of their classrooms and into the streets to have a conversation about climate change, according to CNN. Protests were held in more than 100 cities worldwide in the hopes of having their messages seen and their voices heard.

Protestors were inspired by one teenager from Sweden — a 16-year-old girl named Greta Thunberg — who began having weekly sit-ins outside of Swedish Parliament until they knew what she had to say, according to Vox. Thunberg's environmental work led her to be nominated for a Nobel Peace Prize this year.

As it turns out, people her age were listening to her, too, which is why thousands of students across the world followed her lead on Friday, taking to the streets to call for action to climate change.

In the United States, students based in different parts of the nation came together to start the United States Youth Climate Strike — a means of demanding action and organizing protests across the U.S.

The Youth Climate Strike's mission is something that can resonate with everyone — a call to make a change for the current generation (and the future) before its too late. The mission states, on the website:

With our futures at stake, we call for radical legislative action to combat climate change and its countless detrimental effects on the American people. We are striking for the Green New Deal, for a fair and just transition to a 100 percent renewable economy, and for ending the creation of additional fossil fuel infrastructure.

One of the organizers from the United States Youth Climate Strike, 13-year-old Alexandria Villaseñor told The Nation that while she would love to make a change in the future, she knows it will be too late for her or her peers to make the change, which is why they are protesting climate inaction now.

"By the time the youth are in positions of power, it will be too late to make a change," Villaseñor said. "We have to force politicians to start acting on climate change. Why go to school if we can't have a future?"

Students across the United States were calling for an implementation of the Green New Deal, according to NBC News — the "plan that would implement a complete transition to renewable energy by 2030."

It's impossible to ignore the sheer amount of students who walked out of their classrooms, demanding for change. And hopefully, politicians all over the world listened.

More Like This
This Map Illustrates Just How Many States Would Ban Abortion If Roe V. Wade Is Overturned
Elmo Talks About Getting His Covid Vaccine In A Cute New Video
You Can Schedule Your Kid’s Covid Vaccine Appointment At Walmart
The Covid Vaccine For Kids Under 5 Has Been Sent To The FDA For Review