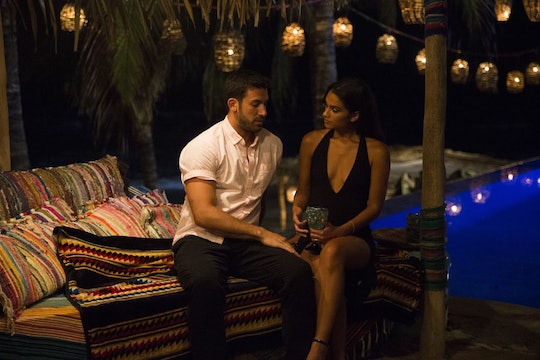 It was sort of surprising how quickly Taylor and Derek hit it off on Bachelor In Paradise this summer. All Taylor said was that she wanted a man to make her a fire in the woods and boom! Derek was all over it. They spent the past few weeks cuddled up in one of those beach beds together, but a new promo for next week's episode has many fans wondering why Taylor and Derek are fighting on Bachelor In Paradise. They've been swooning and snuggling for what seems like an eternity, so it's totally unexpected to see Taylor sobbing in the teaser.

Now, Bachelor Nation knows that ABC and Chris Harrison like to play with our gullible little hearts. They tease us along to rose ceremonies that seemingly never come. They make seemingly small things seem like absolute game-changers. So the sobbing and tension viewers got a glimpse of in the promo between Taylor and Derek might not be as serious as it looks. Although it admittedly looks pretty bad.

It's not like anyone in their right mind would ask Derek out on a date, knowing how close he's become to Taylor. Although, some of these people definitely don't have their thinking caps on all the time, so I guess it could happen. But it seems highly unlikely that he would accept a date card from anyone else even if he was asked.

Maybe someone asks Derek out and he admits to thinking about it, though Taylor wouldn't really be in a position to complain. Remember, Taylor urged her friend Dominique, a new arrival, to ask Diggy out about two minutes after he got back from a date with Lacey.

Apparently, it's something Derek says, according to the promo. But while they're exchanging words it also seems like he tells her to "f*ck" off and then she walks away. What did he say? Is it about another girl? True love? Does he admit to not knowing how to build a fire in the woods and this whole Paradise relationship has been built on a lie? Say it ain't so.

There's a clip of Taylor saying that her "emotional piggy bank is full," but is she talking about Derek or just caught in some other drama? The suspense is TV torture.

Taylor really did stir the pot with Lacey, Diggy, and Dom last week, so the fight could all stem from that, too. Maybe Derek's picked the wrong side. Taylor's not been very good at taking criticism, based on what we've seen during her season on The Bachelor and the subsequent reunions. Again, though, it could literally be anything. Bachelor Nation will just have to wait and find out.

Hopefully, they kiss and make up quickly, though. Because it looks like they have something really good going on. And surely, Taylor has enough emotional intelligence to work through their first fight without too many scars.