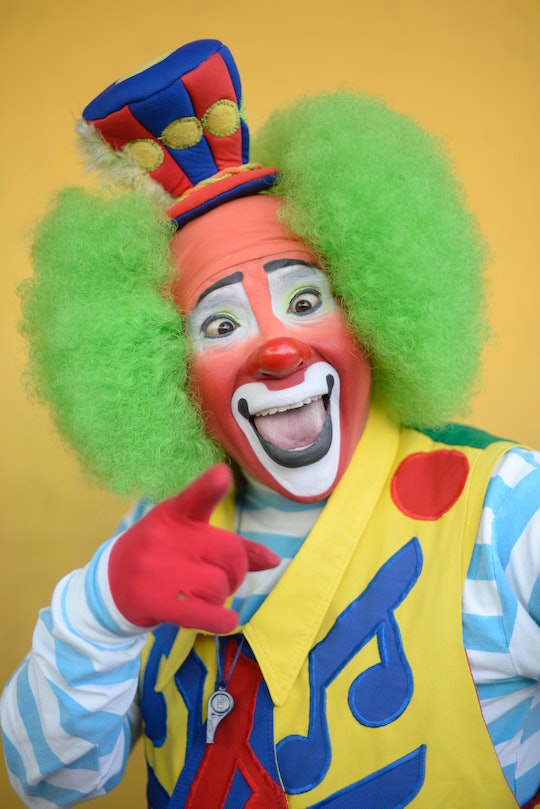 Why Are The Clown Sightings Still Happening? "Clown Panic" Is Basically An Elaborate Hoax

I don't know exactly what it is that makes clowns creepy AF, but the recent string of reported clown sightings across the United States proves that I'm not the only one who thinks so. Back in August, residents of an apartment complex in Greenville, South Carolina, filed a police report claiming that clowns were emerging from the woods to scare them, and children even reported that the clowns had tried to lure them back into the woods with money. According to People, police have yet to find any evidence of criminal behavior, but clown sightings have continued to pop up in other cities. Why are all the clown sightings still happening? Bad Clowns author and folklorist Benjamin Radford told the magazine that scary clown "sightings" are actually not an uncommon phenomenon, and that, while totally creepy and enough to make us all collectively paranoid, the actual threat is pretty much non-existent. Radford said, “The fact is, to date, there are no confirmed reports of any clowns actually abducting, harming, killing [or] molesting kids. There just aren’t. There are zero.”

In Flomaton, Alabama, threats from someone calling themselves "Flomo Klown" led to two lockdowns at area schools, according to The Guardian. Police later arrested 22-year-old Makayla Smith, along with two other juveniles, for making the "terroristic threats." Smith has not responded to Romper's request for comment. In Kentucky, a 20-year-old man was recently arrested for hiding in a ditch in a clown costume, and in Georgia, police were called to investigate after witnesses called 911 saying that two clowns in a white van had parked on the side of the road and were attempting to lure children, according to The Washington Post. When officers arrived to search the van, they found nothing, other than a normally-dressed man who'd run out of gas. The two callers, 26-year-old Brandon Jerome Moody and his sister-in-law, 27-year-old Rebecca Moody, were later arrested and charged with obstruction and unlawful conduct during a 911 call after Brandon admitted that they'd lied.

Similarly, according to Fox News 8, 24-year-old David Wayne Armstrong of Winston-Salem, North Carolina, was also arrested at the beginning of September for filing a false police report about a clown sighting. Armstrong told police that a red-haired clown wearing white overalls knocked on his window in the middle of the night before he chased it away into nearby woods. Like Moody, Armstrong also later admitted he'd made it up.

Some might consider lying about clown sightings to be a harmless prank, but Winston-Salem Police Lt. Steven Osborne told Fox News 8 that police are required to investigate all claims, and that false reports are a burden on the department's ability to be there for those in need:

There's also the fact that the collective fear around these stories is enough to convince citizens to take matters into their own hands. According to The New York Times, some of the spooked Greenville residents reportedly fired shots into the woods behind the apartment complex, and on social media, many called for retribution against Flomo Klown in Flomaton, advocating paintball guns and pistols as ways to take the clown down, according to The Guardian.

But Radford, for one, said that anyone freaking out about clowns needs to calm down and remember that the threat is not actually real. Furthermore, he argued that these kinds of clown story clusters aren't even new — they've been happening off and on since the '80s, although the rise of social media hasn't helped to prevent the spread of fear. So far, none of the clown claims have turned out to be real, or anything worth worrying about, and that's important to remember. But then again, when the clown sightings are said to be happening in your city, that can definitely be easier said than done.