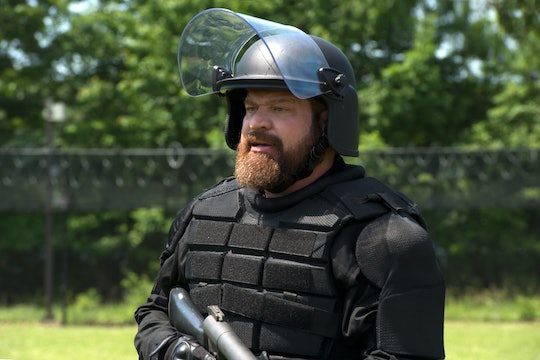 Why Are The Guards On Strike On 'Orange Is The New Black'? Privatization Got To Them

One of Orange Is the New Black's greatest accomplishments in Season 3 was exploring the Litchfield guards' inner lives just as deeply, richly, and with just as much complexity as it has the inmates' lives. Rather than set up a false dichotomy where the prisoners are the "good guys" who just got themselves into a bad situation and the guards are the monsters, Season 3 shows us that the guards have it tough, too. So tough, in fact, that they decide to unionize. So why are the Orange Is the New Black guards on strike? Prison privatization has a lot to do with it.

In Season 3, Litchfield, which has become too expensive for the government to run, gets taken over by a private corporation called MCC instead of closing. Since a private company works in its own interest by definition, corners are being cut everywhere. Both the inmates and the guards are suffering the consequences. For the guards, this means being downgraded from salaried positions to part-time shift employees without benefits. And their jobs were already stressful and strenuous before making poverty level wages and being stripped of benefits. To add insult to injury, MCC hires new, young, rookie guards (one of whom turns out to be a rapist) to fill in the staff and doesn't bother spending the time (i.e., money) to train them properly.

To some extent, the COs need to be able to relate to the inmates to maintain order. With inexperienced and untrained guards power tripping all over the place, the atmosphere has become downright dangerous for guards and inmates alike. The veteran guards, out of concern for their safety (both physical and financial), decide to unionize in an effort to try and drum up some security and stability under new management. Unfortunately, Caputo — who is initially open to unionization — betrays them in the eleventh hour.

The old guards are so upset by this final, devastating blow that they walk off the prison grounds, just as a crew happens to be mending a broken fence. With lowered security and a literal escape hatch, the inmates stage a mass "exodus," though no one bothers trying to escape for real. Instead, they all jump into the lake for an impromptu beach day, which is the final scene of Season 3.