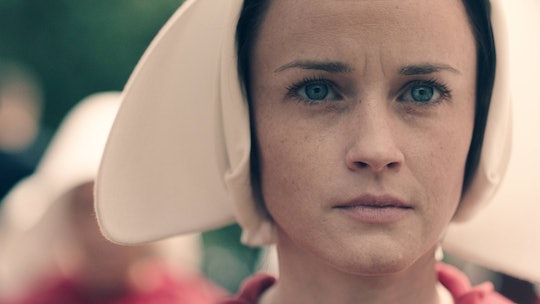 Women Are Treated Like Property On 'The Handmaid's Tale'

The Handmaid's Tale is coming to Hulu on April 26 as a 10-episode miniseries based on Margaret Atwood's 1985 novel of the same name. Atwood serves as a consulting producer on the show, which is apparent by how closely the trailer seems to hew to the action of the book. It stars Elisabeth Moss as protagonist Offred, who goes from living a normal life with her family to being a "handmaid" in a new regime led by a totalitarian Christian fundamentalist government. So why are the handmaids given different names on The Handmaid's Tale? It's a part of the systematic stripping of women's rights meant to dehumanize them and subject them to male authority.

In the story, a Christian extremist group called the Sons of Jacob launch an attack in the United States, killing the president and most of Congress. They quickly seize control and suspend the Constitution under the guise of "restoring order" to the region, which gives them the ability to strip women of their rights. They rename the territory "Gilead," outlaw female employment, shut down their bank accounts, and forbid women to read. Instead, women are organized into a caste system based on fertility, race, and health, given uniforms, and put to work serving the ruling class.

"Handmaids" are fertile women who are conscripted to bear children for the upper class families who are infertile. Due to a combination of pollution and rampant sexually transmitted disease, there is a so-called "plague" of infertility in Gilead. However, because it's a fundamentalist Christian society fashioned after the Old Testament, law dictates that it is scientifically impossible for men to be sterile, and therefore, all infertility issues are the fault of women. So handmaids are assigned to members of the ruling class to participate in impregnation rituals, carry pregnancies to term, and then hand the babies over to the families, never to see them again, after they give birth. Women who refuse to accept their assignment as handmaids are sent to "The Colonies," a death camp where women perform life-threatening labor, such as cleaning up radioactive waste until they die of radiation poisoning.

In an effort to indoctrinate women, handmaids are stripped of their birth names and instead given new names, which are a contraction of the word "of" and the name of the man to whom they are assigned. In Offred's case, she belongs to a man named Fred, and so she is "of Fred" or Offred. She has a friend who is assigned to a man named Glen and so she is named Ofglen, and so on. Every time a handmaid is assigned to a new family, she gets a new "of" name fashioned after the man whose child she's supposed to bear. Handmaids are forbidden from speaking their birth names aloud.

The story is a chillingly relevant one to adapt during a time when we seem to be rolling back women's rights by the day, and the Hulu series looks poised to deliver.