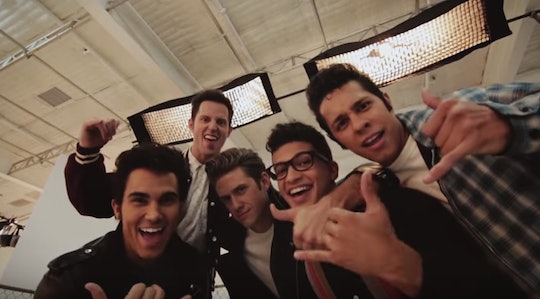 Why Are They Called The T-Birds? The Boys of 'Grease: Live' Are Named After This Classic Item

As Grease: Live rolls closer and fans do their due diligence by re-watching the original musical flick with John Travolta and Olivia Newton-John, a couple people might be wondering why a badass boy gang in the '50s would call themselves "the T-Birds." (I'm not judging, but admittedly it leaves something to be desired.) So why are they called the T-birds? Not shockingly, it had something to do with a really cool car that everyone liked back in the day.

The reigning theory is that the boys were all in love with the Ford Thunderbird — the '50s car to have — so they named their greaser gang after the luxury speedster itself, becoming "the Thunderbirds" in the process. From there, it's a quick jump over to "T-birds." (If they had been around when the gang were all kids, the boys probably called themselves "the Hot Wheels.")

One thing to note, though: Danny's beloved "Greased Lightning" was not — unfortunately for the T-birds — a Ford Thunderbird. Greased Lightning was a 1948 Ford De Luxe... but the high school boys could dream, right? No word on what car will be used in Grease: Live, but maybe this generation of T-birds will finally get their dream Thunderbird.

A picture posted by Jordan Fisher, who will be playing Doody, shows a car that looks fairly similar to the original Greased Lightning, so there could be hope:

The actors playing the T-birds include Aaron Tveit, who plays the group's leader Danny; Carlos PenaVega, who plays bad-boy (and total heart-throb) Kenickie; David Del Rio as Putzie; Jordan Fisher, who'll be playing Doody; and Andrew Call in the role of Sonny. They've all got some amazing vocal chords on them, and between them and the actresses chosen to play Sandy and the Pink Ladies (Julianne Hough, Vanessa Hudgens, Carly Rae Jepsen, and Keke Palmer) the Grease revival is looking seriously promising.

Fans of the show were graced with an early sneak preview recently, as Entertainment Weekly and Fox officials released a video of the T-birds rehearsing "Greased Lightning" for Grease: Live. Most notably, a few of the songs are set to feature new lyrics, since the original tunes were a tad unsuited for a major network audience. “We’re working really hard to get those lyrics out of our heads,” Tveit joked to EW. “Hopefully it doesn’t slip out.”

Grease: Live will air Jan. 31 at 7 p.m. on Fox, which means I'll be tuning in to see if any of the T-birds accidentally sing "the chicks will cream" on live television. And because, you know, it's Grease.