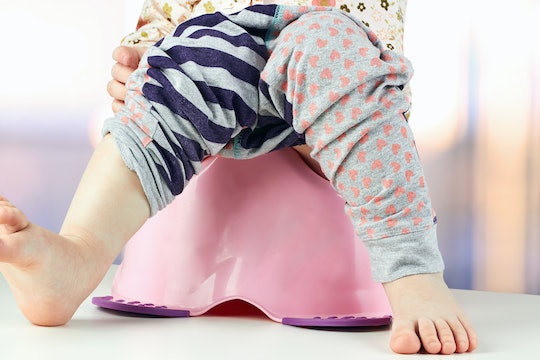 When I was potty training my youngest, I was not prepared for the storm that it would become — literally. There was poop everywhere. Everywhere but the potty, that is. She'd go in her Pull-Up or underpants, but the toilet? That was a bridge too far. She had no problems peeing in the potty — I actually think she liked it. However, when it came time for number two, she would hide from the potty. My friends said this was common, and it made me wonder, why are toddlers afraid to poop on the potty?

Toddlers — the same creatures who will blithely walk across the wobbly bridge at the park, stack chairs together to climb up to the tallest cabinet to get to the chocolate stash, the children who honestly don't care if their clothing makes them look like rejects from the clown convention just as long as they can wear all their favorite colors at once — are horrified by a porcelain bowl. Pediatrician Alan Greene, MD, FAAP, wrote for Parents that it is likely some combination of not wanting to be bothered with the whole process, and dreading the actual activity, and the desire not to be delayed as they go about the course of their day.

When I asked my daughter's pediatrician why toddlers are afraid of pooping on the potty, she assured me that one day, kids just do it. At the time, I did not understand what that meant. She was already fully potty trained for peeing, why not pooping? Dr. Kathleen Berchelmann, a pediatrician in St. Louis, wrote on the Children's MD blog that it is likely something a lot simpler and less esoteric than a fear of the potty. Instead she wrote that toddlers "have better things to do than poop." Unlike my husband, who could spend all day in there.

She wrote that "not wanting to poop in the toilet is a very common problem." Toddlers have a lot going on, often all at once. Why would they want to stop playing with blocks or watching YouTube videos of people opening boxes to poop? She continued, "It’s rooted in attention span. Usually the child just doesn’t want to sit on the potty and wait for the poop to come out."

To be quite honest, my daughter was an incredibly active toddler. At age 7, she hasn't slowed. Activity is hard-wired in her DNA, and the idea of stepping back from an activity to do something as seemingly boring as relieving her bowels would have been anathema to her. To be honest, she and I are both incredibly efficient in our bathroom habits, but my husband and son? Well, they both have phones with games on it, and yeah, they're not so efficient.

Fabian Gorodzinsky, a community pediatrician and an associate professor at the University of Western Ontario in London, Ontario, told Today's Parent that it might also be due to a bad experience with constipation, especially if you notice they are holding their bowels. He said that a single, painful bowel movement on the potty can lead to potty anxiety, and that can begin a vicious cycle. He says in that case, take it slow, make sure they're getting enough fiber and water, and let them take the lead for a little while.

The best thing you can do for your child, according to Dr. Natasha Burgert for US News and World Report, is to offer them support. That might mean a stool for an easier pooping posture, it might mean allowing them to ask for a diaper, and taking a more gradual approach. The key is that you're not shaming them for not pooping in the potty, but supporting them so that they might soon.