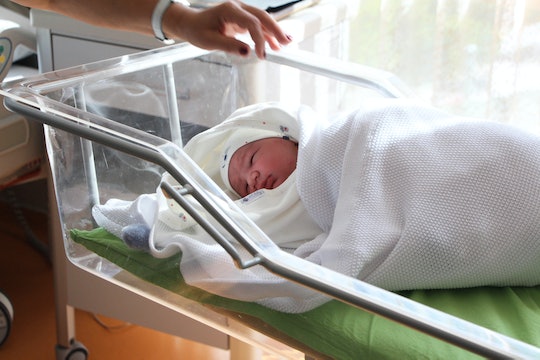 Why Are Women Checking Out Of The Maternity Ward Early?

Paula, a mother of two, gave birth to her second child at 5:30 in the evening. Five hours later, she was home with her family — and, looking back now, she knows it was the right choice. “It was so much nicer being home,” she tells Romper. “It was absolutely the best decision, and my recovery was that much easier.” Despite the fact that U.S. insurers are mandated to provide mothers with maternity stays that are 48 hours at a minimum (and 96 hours for a Caesarian), Paula’s experience is not uncommon. Many women are deciding to check out early after enduring hours of labor and delivery — a decision that is ultimately up to the woman and her care provider.

Iris, also a mother of two, has a similar story — but she checked out early for both of her children. She explains to Romper that she spent 24 hours in the hospital with her first daughter, and just under 12 with her second. “I would have gone home earlier both times,” she says with a shrug. “I just wanted to get out of there.”

For Stacy, there was an even more specific objective in getting back to her family mere hours after giving birth. “It was Thanksgiving!” she tells Romper of the birth of her second son. “I gave birth in the morning and I was home for the family dinner that night. I didn’t want to miss a thing.”

I took my baby to a mom’s group the next day!

I had a second-degree tear. My milk didn’t come in for four more days. It was absolute torture.

While many of the women we spoke with had positive stories (“I took my baby to a mom’s group the next day!” Camila says with a laugh), not everyone can look back on the decision to check out early with happy memories. Lindsey decided to check out after 24 hours with her first child, noting that the choice resulted in a truly challenging experience. “I didn’t sleep for three days,” she tells Romper. “I had a second-degree tear. My milk didn’t come in for four more days. It was absolute torture.”

The duration of postpartum hospital stays has dropped over time. In 1970, new mothers spent an average of 4.1 days in the maternity ward, and before that, even longer. Today, U.S. women spend an average of two days in the maternity ward, compared to four days for women in France, per a study published in PLOS Medicine and cited by Business Insider. The World Health Organization recommends a 24-hour stay to monitor the baby and the mother's health.

Still, the “early checkout” phenomenon isn’t necessarily new; women have been doing it for decades.

Holly, who gave birth to her second child in 1985, tells Romper that she was back at home just six hours after delivering her son. She explains that she stayed for the full duration in the maternity ward with her first child, and felt like there were too many “routine checks,” from the hospital staff adding, “It was uncomfortable, and broke the process of staying calm and bonding as a family.”

Holly also adds that, like the women above, she just wanted to be back home — especially because she had her older daughter to think of, who was just 3 at the time. “When our second baby was due we wanted to make sure that we didn’t repeat any of those experiences from the first time around,” she says. “We planned to get back to our home as soon as it was healthy to do so. But another huge factor was that we didn’t want to be away from [our daughter] Abigail. She was already aware of a baby coming and we were all expecting this big event, and it seemed like a terrible time to leave her at home with a sitter. She was fearful of what was happening, so we wanted to make sure we limited the time we were away from her.”

While the notion of checking out of the hospital mere hours after giving birth might sound shocking to some, research shows that it isn’t necessarily a bad idea — as long as you get the OK from your doctor. Early postpartum discharge "seems to be clinically safe for both mothers and newborns,” reported a study published by BMC Pregnancy & Childbirth. Similarly, Hannah Dahlen, Professor of Midwifery at Western Sydney University in Australia told The Guardian that home is the best place for new mothers and their babies. “[The] risk of infection is so much lower at home, and you don’t have to listen to the noise of the hospital and have people coming in and out of your hospital room, sometimes offering different advice,” she explained.

However, Dahlen said that a key factor in making the decision to check out early is having sufficient support at home. “People expect that once women have a baby they are immediately competent and able to do it, and some women believe that asking for help is a sign of failure,” she told The Guardian. “It’s not. There is the saying that it takes a village to raise a child, and we need that village involved and helping out right from the beginning.”

Hospitals, if noisy and busy, can provide lactation services, early diagnosis of postpartum depression, and care for birth injuries, as well as monitor a baby's weight and condition during a time when women need to rest and recover from the ordeal of childbirth. But they can do better to provide an environment more conducive to recovery — the drop in postpartum stays is in part due to rising health care costs, according to the CDC, and therefore not tied to the welfare of mothers or babies. For this reason, the American Pregnancy Association advocates for the use of a postpartum doula to ease the transition from birth to hospital to home.

Ultimately, it’s up to the mothers to decide whether or not to check out early — given the green light from her care provider. What works for one woman won’t necessarily work for the next, and that’s entirely okay. Every pregnancy is different, as is every labor, delivery, and, ultimately, child. As Holly notes: "I wouldn't tell any other mother to do it this way. But this way worked for my family."

More Like This
Why Does My Baby Cough While Breastfeeding? Experts Explain
My C-Section Almost Derailed My 5th-Degree Back Belt — Almost.
Diastasis Recti Exercises You Can Do At Home To Heal Your Abdomen
Dealing With Postpartum Back Pain? Physical Therapists Share Their Tips
What Parents Are Talking About — Delivered Straight To Your Inbox