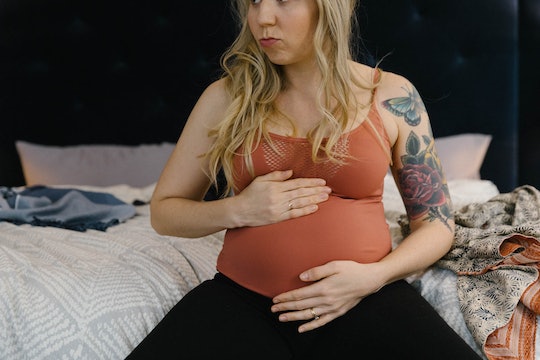 Pregnancy Farts Happening Too Much? There's A Reason For That

Pregnancy brings glowing skin, glossy hair, and, unfortunately, gas — lots of it, too. Sure, it isn't one of the more talked-about aspects of pregnancy, but its existence is real. So why are women more gassy during pregnancy? Hormonal shifts and your changing body make burps and farts inevitable.

To start, you can blame a lot of this excess gas on hormones. Pregnancy boosts production of the hormone progesterone, which causes muscles to relax, according to the American Pregnancy Association (APA). This makes the digestive tract muscles relax as well, allowing gas to build up in your system, as further noted by the APA. All the gas buildup unfortunately, increases your output of burps and flatulence. Oh, and in the later stages of pregnancy, the location of your growing uterus slows digestion and makes you produce even more gas, according to Healthline. Basically, extra gas is a fact of life until the baby arrives.

In addition to becoming a human gas factory, pregnant women may find it more difficult to control their bodily functions at this time. (Thanks, pregnancy.) The lax muscle control from pregnancy makes gassy accidents pretty common, according to WebMD. If you happen to let one out in the middle of a meeting, just blame the baby. Seriously, though, no kind person would hassle a pregnant woman for passing gas.

Is there anything you can do to stop these gas attacks? Not really. Preventing gas during pregnancy is pretty futile, according to the APA. There are, however, a few steps you can take to lessen its effects. Getting regular exercise, eating smaller meals more frequently, and avoiding foods that cause gas may help settle your digestion, according to the Mayo Clinic. Foods that commonly cause gas include dairy, artificial sweeteners, and cruciferous vegetables such as kale and broccoli, according to Bustle. On the other hand, foods such as eggs, fish, and fruits are not as likely to cause gas, according to the International Foundation for Functional Gastrointestinal Disorders. Experimenting with what you eat, and sticking to these safe foods, is one option. Or you can accept excess gas as a normal part of pregnancy and tell anyone who questions it to eff off. The choice is yours.