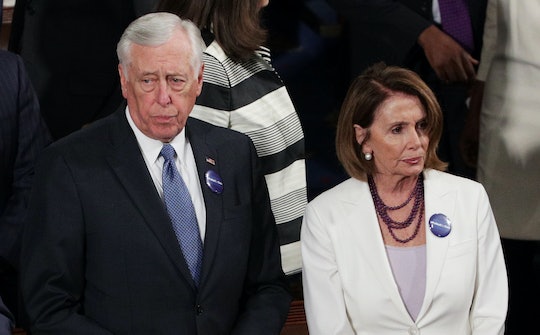 President Donald Trump delivered a speech to a joint session of Congress Tuesday night in which he sought to update the country on his first month in office. And while all eyes were on Trump during his remarks, many also noticed a certain color scheme in the audience, as many women in Congress wore white to the night's speech. So, why are women wearing white to Trump's joint address? The color holds much symbolism for suffragists, feminists, and women everywhere.

In the wake of America’s first almost-female presidency, clothing choices took on a whole new meaning, especially when Hillary Clinton lost the general election last November. A Facebook group, entitled Pantsuit Nation, gained millions of members, and the color white began to be worn by many as a form of silent protest. Why, though?

Well, during the women's suffrage movement, the color white was a symbol of purity, persistence, and hope for women fighting for equal rights, dating all the way back to Seneca Falls, New York, in 1848. So, today, when a man who has been accused of sexual assault on more than one occasion and bragged about allegedly groping women without their consent took to the podium to speak, the conscious choice to wear all white, specifically by Democratic women, seemed fitting.

The decision to wear white during Trump's address was spearheaded by Rep. Lois Frankel, a Democrat from Florida who also chairs the House Democratic Women’s Working Group. The choice of color is important, as many women also decided to wear white on Election Day last year, as a nod to the suffragist movement. Back in November, it seemed that the nation was heading in a progressive direction, possibly electing its first female president.

However, as the results of the Electoral College came in, many were saddened at the direction the nation seemed to be moving toward. Since then, the color white has become the ultimate color of women's empowerment and hope.

Just as Frankel's mission was to stand united for women's rights and progress, it seems that women came to Trump's address prepared to stand their ground, too. Notably, this joint session is one of the few in which Democrats and Republicans have sat on opposite sides of the room since the 2011 shooting of Gabrielle Giffords, a former congresswoman who has been critical of Trump's rhetoric on guns and women.

It's no secret that America is a divided nation right now, with party lines being drawn definitively, and loyalties being tested in new ways. But despite the fact that it seems progress might not be possible, the Democratic women in Congress aren't backing down.

Keep fighting, ladies. Your voices matter and your show of courage on Tuesday did not go unnoticed.