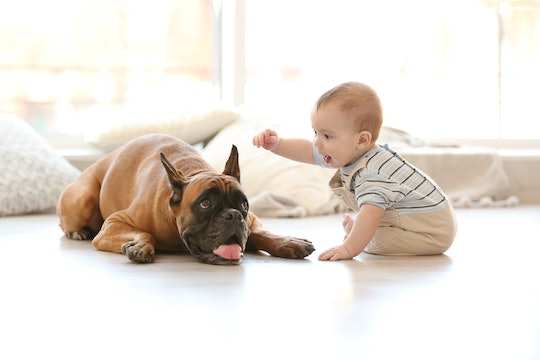 The Reason Babies Aren't Afraid Of Dogs Is Pretty Simple, But Dangerous

I can't remember a time when my family didn't have a dog, and I've continued this tradition with my own family. Right now we only have one, but when my son was born, we had two huge dogs. I always thought that his noticeable lack of fear around dogs was because of how he was raised, but I've learned that isn't the case — infant fearlessness around dogs is actually pretty universal. But why aren't babies afraid of dogs?

The fear of dogs in older children is extremely common, and it makes sense, according to SBS's The Feed. The article noted that the fear "is more common than you’d expect, affecting at least one in 20 people from children to adults." The American Academy of Pediatrics (AAP) defines this aversion as a type of phobia, and like all phobias, they develop out of a nagging, persistent fear. However, recent research into the way our brains begin to develop fear shows that babies might be immune to such phobias because they delight more in their own curious nature, unblemished by any outside apparatus that might tarnish that sense of wonder.

Researchers from the Association of Psychological Sciences (APS) wrote that a big part of fear development is the cues babies receive from their parents and trusted caregivers. If you as the parent aren't showing any fear of the dog, or any wariness towards it, it's less likely that your baby will show any either. The researchers found that it's also due to how they've interacted with what would cause them fear, like a dog. If that dog is a growling, biting menace, your child will be more apt to develop a fear of them more quickly, because, as the APS noted, "Humans detect and learn about danger through direct interaction with their physical and social environment and through observations of the emotional reactions of other individuals."

Fascinating research into the study of snakes might provide further clues as to why babies aren't afraid of dogs. That study sought to discover if infants had an essential fear of snakes rooted in an evolutionary process that is seen in other mammals. It makes sense that there would be specific, evolutionary triggers that live some place in the developing hindbrain that would warn people off scary things like dangerous animals and bugs. However, that's not what the researchers found.

The researchers at the Journal of Experimental Child Psychology found that babies have such an active curiosity, that unless there's a pointed reason for them to fear something, they will probably be more interested in it than not — even if they find it particularly attention-grabbing, like in the case of snakes and spiders. The "ooh, that's gross" sensation might be present, according to the study, but that doesn't cut off the feelings of "I should touch it and make it my friend." Researchers wrote that in their study, "children demonstrated an avid interest in all of the live animals," which is part of the reason that they seem to simply have no inherent fear in them.

Fear is a learned response to stimuli and input, according to Emotions and Anxiety (PLE: Emotion): New Concepts, Methods, and Applications, which examined the role of negative interaction and influence on the development of fear in infants. Researchers found that while babies do have a sense of fear, it's more rooted in things that they are beginning to understand. When a parent goes away, will they come back? That object permanence lesson is a fear they can process. A big fluffy thing with a wagging tail that mommy is giving kisses isn't as scary — it's merely interesting. It isn't until that dog does something to elicit fear, like growl at or bite the child, that the fear becomes concretized in the baby's mind. That's why it's so important that you teach your kids how to interact with dogs safely; they simply don't know to be afraid. And until they understand that caution is warranted, they're just going to keep grabbing for Fido's ears and tail, which Fido really hates.

More Like This
Can You Give A Sleeping Baby A Breathing Treatment? Experts Explain
Here’s What To Do If Your Baby’s Nose Bleeds After Suctioning
Can You Burp A Baby Too Hard? A Pediatrician Shares Tips For Gassy Tummies
Is It Good For Babies To Be Exposed To Germs? It’s Complicated