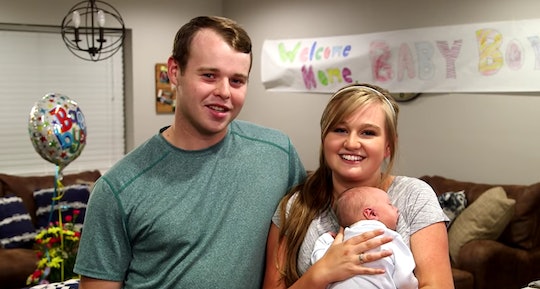 Why Aren't Joseph & Kendra Duggar On Social Media? They Do Things A Bit Differently

When celebrities and reality stars hit big milestones — like getting engaged, tying the knot, or having a baby — fans can usually count on getting regular updates via social media. Because in this day and age, Instagram or Twitter is the quickest way of delivering information to a wide audience. It's actually a bit disconcerting when someone who is reasonably famous isn't online in some shape or form. I mean, even most adult members of the Duggar family are on social media at this point, and their ultra-conservative rules strictly limited television and internet access while growing up. So naturally, Counting On fans are probably wondering this: Why aren't Joseph and Kendra Duggar on social media? They're the only Duggar couple who aren't, after all.

In case you lost count, Joseph is seventh in the lineup when it comes to Michelle and Jim Bob's 19 children. Like all unmarried Duggar kids, Joseph didn't have any social media accounts prior to his relationship with his now-wife, Kendra Caldwell. However, since Joseph's siblings have all signed up for Instagram — either with their own accounts or a joint account with their partner — during engagement or shortly after marriage, fans likely assumed that he would follow suit. Except, that doesn't seem to be the case at all. That's because a quick search for either Kendra or Joseph Duggar (or the couple together) comes up with zero official accounts. But why is this so?

Although it's difficult to know for sure why this Duggar couple has avoided social media so far, it might have something to do with Joseph and Kendra being particularly conservative, even by Duggar standards. If you remember, Joseph attended the ALERT Academy — a Christian, military-style boot camp that happens to be endorsed by the controversial (and fallen from grace) religious leader, Bill Gothard. "This drove me to depend even more on God," Joseph wrote of his experience at the academy, according to his and Kendra's website. "As a young man, I can say this was one of the greatest things God used to strengthen and build my faith in Him."

Additionally, Joseph and Kendra showed their above-and-beyond-what's-expected-of-them approach to adhering to their conservative, Christian values during their courtship and engagement. When they were courting, for example, pretty much the only form of physical contact they had were 3-second side hugs, according to Inquistr. (And they were the ones to decided to implement a time limit.) Once the couple became engaged at Joy-Anna and Austin Forsyth's wedding, they decided that hand-holding and saying, "I love you" were allowed in addition to those side hugs.

So perhaps their staying away from social media is merely an extension of Joseph and Kendra going beyond the "call of duty" in their conservative values? Maybe they've witnessed friends and family becoming addicted? Or they've been warned about the potentially provocative photos they might encounter? Or perhaps they merely want to avoid the trolls and negative comments that other Counting On stars have attracted via social media. Whatever Joseph and Kendra Duggar's reasoning for staying away from social media for the time being, it's obviously their decision to make.

The good news for Counting On fans is they can still keep up with Joseph and Kendra via their website, JoeandKendra.com. And let's not forget the official Duggar family Instagram account, which has included updates on Joe, Kendra, and their new baby during every step of their journey. Of course, fans can also get updates from them by tuning into TLC's Counting On — and luckily, they won't have to wait too long to get your next dose of the Duggars. That's because season eight actually premieres on Monday, July 30 at 9 p.m. (ET). So fear not, loyal Duggar; although you can't scroll through endless Instagram couples of them, there are still plenty of ways to keep up with Joseph and Kendra Duggar.