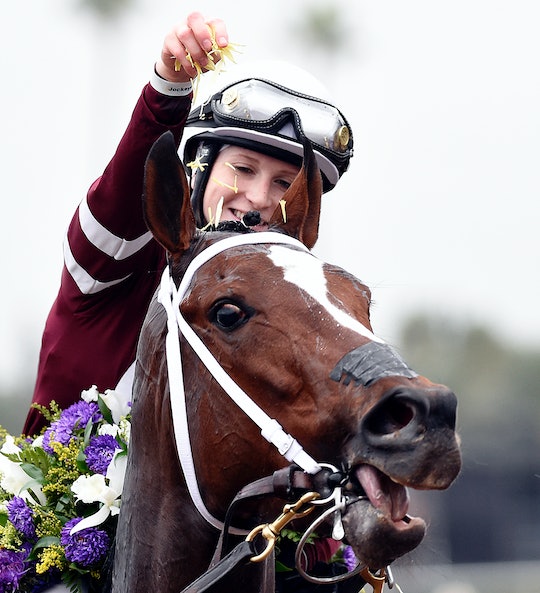 Why Aren't There Any Female Jockeys At The Kentucky Derby? The Sport Isn't Super Welcoming

Go to any stable in your hometown and you're likely to find plenty of teenage girls working and taking care of horses to help pay for their riding. But despite there being no shortage of girls who fall in love with horses from a very young age, there remain relatively few women and girls in horse racing. For instance, why aren't there any female jockeys at the Kentucky Derby this year? The answer seems more complicated than you might think.

That's not to say there haven't been women jockeys to make their own Run for the Roses throughout history. Most recently, there was Rosie Napravnik, who, in 2014's race, had a respectable fifth-place finish. It was the best ever for any female jockey in the Kentucky Derby. But since then, the Derby's had an all-male jockey lineup. So what gives?

There are arguments out there about body composition offering male riders an advantage, but that sounds ridiculous in a sport where success is predicated on maintaining an extremely low weight, something that should offer women an obvious advantage. So frankly, considering there are both women and men with all sorts of body types and sizes, that seems like a ludicrous, sexist argument on its face.

What you can't overlook is how totally, crazy dangerous horse racing is as a sport for any jockey. And, a recent spate of female jockeys killed while racing — four in just 14 months in 2013 to 2014— indicate that racing, for some reason, might just be for more deadly for women and girls. Is that what's keeping women from reaching the highest levels of horse racing?

Depressingly, Napravnik told 60 Minutes in 2013 she has experienced some pretty heavy-duty sexism in the saddle including taunts of "Go home and have a baby!' and "Go home and stay in the kitchen!" she said. But that's just from the fans trying to talk smack before a race. They aren't the ones controlling the sport. It's the trainers owners that ultimately make the call on who races their horses, and they don't sound much better.

"There are still owners and trainers that don't want to ride a female," she said in the 60 Minutes interview. "The only way that I deal with that is...to try to beat that person in a race."

Win. That's the only thing any woman can do to prove they deserve respect and equality. It's not fair, but it's just how it is. And although there aren't any women lining up in the gates at Churchill Downs this year, that doesn't mean the next future jockey to rock the horse racing game won't be a woman. But the sport needs to encourage and support women like Napravnik, who has broken down barriers for the girls coming up behind her.

Because big, floppy beautiful hats are traditional and super fun to wear, but it would be nice to see a few girls strap on a helmet for the Kentucky Derby too. Just sayin'.