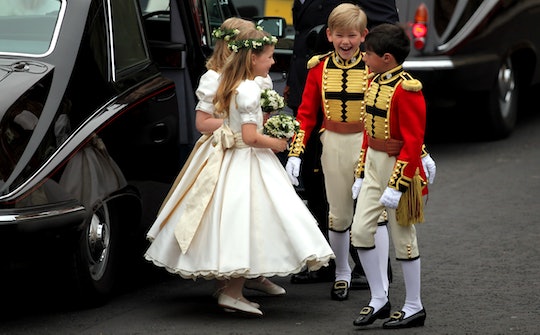 It's true — the royal wedding is officially here. And, really, we're loving it. Not only are Prince Harry and Meghan Markle a super charming couple, but with their sense of style, this royal wedding will not disappoint fashion-wise. Sometimes it's just good fun to get a little glimpse into the life of the royals, and royal weddings are no exception. Some aspects of royal weddings are confusing though — like bridal parties. Why aren't there bridesmaids at the royal wedding? It might come down to tradition.

According to Elle, it is British tradition to have children as bridesmaids and page boys, so Prince Harry and Meghan Markle's wedding seems to follow suit with the tradition. And though royal weddings do have maids of honor, Markle has chosen not to have one. As Elle mentioned, Markle has a number of close adult girlfriends and could not decide between them — they will all assist her at various times throughout the day.

And, if you're thinking, "Wait, didn't Princess Kate have her sister as a bridesmaid," you're right. According to The New York Times, Pippa Middleton did serve as her sister's bridesmaid, but that was an exception, not the rule. Royal weddings do not traditionally have adult female bridesmaids.

According to Town & Country, in the U.S., bridesmaids are typically a representation of the bride's closest friends, but that's not the case with British royal weddings. Since Queen Elizabeth's wedding, royal bridesmaids have been children or early teens.

Because bridesmaids and pageboys in royal weddings are typically children, it makes sense that Princess Charlotte will serve as one of Markle's bridesmaids noted Reader's Digest, and Prince George as a pageboy. What we safely assumed is that Princess Kate will not be a part of the procession, as it's unbecoming for a member of the royal family to walk behind a commoner, according to Cosmopolitan.

Of course, not being able to choose a maid of honor between a large group of friends is something most brides can sympathize with. And, as noted by Marie Claire, with a friend list that includes the likes of Serena Williams, Priyanka Chopra, Sarah Rafferty, Gina Torres, and best friend Jessica Mulroney, it's easy to see how Markle didn't want to choose.

But that doesn't mean that Markle's girlfriends won't be with her on the big day. Marie Claire mentioned that Markle's friends have been actively helping her prepare for the wedding, and they will be to support her the day before in London and on her wedding day in Windsor. In fact, as the magazine mentioned, some of her friends' kids may even serve as bridesmaids as Markle weds Prince Harry.

While a lot of the talk during Prince William and Princess Kate's royal wedding surrounded how incredible Kate's sister Pippa looked in her Alexander McQueen bridesmaid dress, that won't be the case at this wedding. Without adult bridesmaids, all eyes are on Markle as she walks down the aisle in her wedding gown. Markle is gorgeous and sophisticated, with impeccable style to say the very least, and the public has been anxiously awaiting what's sure to be a stunning royal wedding dress.

And though Markle's girlfriends won't have an official role on her royal wedding day, they are sure to be there to help her celebrate this momentous occasion. After all, it's not every day you marry a Prince.

Whether or not you're fans of the royals, there's really no bringing down the enthusiasm of a royal wedding. Sure, their lives are nothing like ours, but that's what makes it all the more fun to watch. Of course, in this case, there's an additional fairy tale aspect — Meghan Markle is not only a "commoner," she's also American and biracial. A real life Cinderella, really.

This article was originally published on May 10, 2018