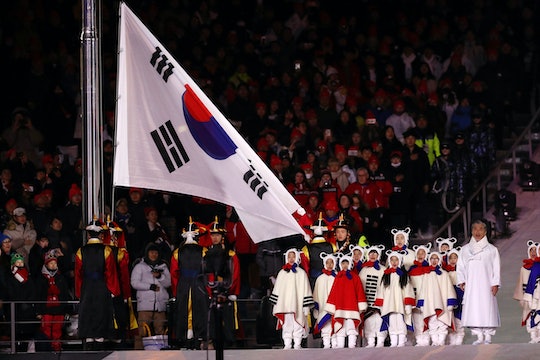 The Olympics is full of fierce competition but, at its culmination, it's a time for just the opposite: The closing ceremony is a display of solidarity, and it showcases international unity as athletes from across the globe gather in the same stadium, representing the world coming together as "one nation." And they aren't aren't calling out the countries' names at the closing ceremony, possibly as a symbol of that unity.

The theme for the 2018 Winter Olympic Games in PyeongChang, South Korea closing ceremony is "Next Wave," and it looks towards the future, according to the Olympics website. It's a future for all the participating athletes, regardless of their origins.

In the opening ceremony of all Olympic Games is the Parade of Nations, in which each national team is formally introduced and walks behind their designated flag bearer. Fans keep watchful eyes for their favorite athletes, and they root for their countries with pride. At the closing ceremony, the host country's national anthem precedes the Parade of Flags. The Greek flag is always carried out first, since Greece is home to the Olympics' roots, and the host country's flag is carried out last; all the other flags appear in alphabetical order, according to the International Olympic Committee. The athletes immediately follow the flag parade, but not this time. During the closing ceremony, the athletes aren't actually separated by country; rather, all the athletes enter the stadium together as one, according the International Olympic Committee. It's symbolic of exactly what the Olympics is all about: world unity.

The United States Olympic Committee recently announced that cross-country skier (and PyeongChang gold medalist) Jessie Diggins would be carrying the flag on behalf of Team USA at the closing ceremony. Fans will have to look for the rest of the American athletes in a pretty big crowd, so I'd suggest looking out for their hats, which will have the American flag on them.

Thanks to the vision of the Olympics founder, Pierre de Coubertin and the efforts of past and present host city organizers, the ceremonial aspects of the Olympic Games set them apart from other international sports competitions.

"The protocol and splendor of the Olympic ceremonies, which go hand-in-hand with the celebration of the Games as everyone knows them today, make this event a unique and unforgettable festival," reads the closing ceremony facts sheet by the International Olympics Committee.

The athletes walk en masse and in no particular order during this parade, according to the committee, before taking their seats reserved for them in the audience. A young Chinese man and apprentice carpenter in Australia, JohnIan Wing, proposed having all the athletes parade in no order at the 1956 Games in Melbourne. Before those Games, the athletes had always marched behind their flag-bearer, and now they march together as one.

"It [has] a festival atmosphere to recognize and celebrate the athletes’ hard work and achievements at the Games," Jang-hwan, director of ceremonies for the PyeongChang 2018 organizing committee, wrote in an article on the official Olympics website. "We have created a show that looks towards the future."

While all the countries haven't been named in the closing ceremony, there will be one country particularly celebrated: Japan. This year’s Olympic torch, which was lit back in October in ancient Olympia, Greece, to honor the birthplace of the Olympics Games, will be passed on to Tokyo for the 2020 Summer Olympics, TIME reported. The 2020 Winter Olympics will then be held in Beijing, China, and it will be the first Winter Olympic Games ever to be held in the country.

While the Olympics closing ceremony is bitter sweet, the passing of the torch will symbolize hope for all the Olympians mixed in the crowd. They'll look forward to their futures, bringing their home countries — and the world — pride again in four years.