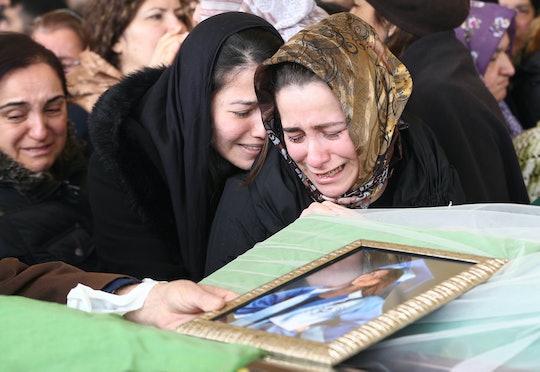 Why Aren't We Talking About Turkey & Other Cities Recently Hit With Violence?

After two explosions at a major airport and central metro station in Brussels on Tuesday, there was the expected explosion of information and reports in the media about the attacks covering all sorts of angles. It was a busy news day, as journalists call it. Later in the day, I posted a story about the outpouring of support for Brussels on social media. One of my best childhood friends, and a well-read Marine officer, quickly put me in my place when I posted the piece to Facebook. "No one gave a f--- about Turkey," he commented. " As much as I was disheartened that my point about solidarity was moot, he had a good point. Why aren't we talking about Turkey and other cities racked by violence, many of them ISIS related, like the Brussels or November Paris attacks?

It's complicated, but the tally of cities throughout the world that have suffered terrorist attacks in recent months, or even days, is readily available for anyone interested. As NPR reported this week, in the past ten days alone there have been terrorist attacks in Nigeria, Yemen, the Ivory Coast, and two in Turkey. The attacks were led by Boko Haram in Nigeria, a Saudi led coalition in Yemen, and al-Qaida in the Ivory Coast. In Turkey, a splinter group from the Kurdistan Workers' Party led an attack on March 13, while on March 19, two suicide bombers with ISIS affiliation and dual U.S. citizenship carried out a second attack.

Terror and violence is complicated, hard to contain, and tragic anywhere it occurs, including the attacks in Brussels this week or Paris last November. So why is our collective attention focused on just Europe?

Is It The Media's Fault?

If Facebook supplied a filter or Twitter a hashtag for every act of terrorism throughout the world, every day, we'd all be very busy to keep up with the changes. There are many that assume the Western media just does not "talk about Turkey" and focuses attention only on Western (or white) victims of terror. But that assumption isn't entirely fair.

After the Paris attacks in November, Max Fisher over at Vox wrote a thoughtful breakdown of how the media handles terrorist attacks and world news. In it, he cited a tweet that was widely circulated after the November 13 attacks in Paris about how the media wasn't covering a Beirut attack just a day before. But the image used in that tweet, to prove that the media doesn't cover world news, was from 2006. The fact that I can link to a report of the attack almost disproves the point.

The sentiment to draw attention to other parts of the world was well intentioned, but its meaning was widely misunderstood, and incorrect, to boot. Fisher wrote in his piece about the struggle to cover events throughout the world and the fact that those world news stories are often the least "clicked" upon as they make their way around the Internet. He wrote:

It's not just me, of course: My peers throughout the media have dutifully and diligently covered such attacks for years. Local reporters and foreign correspondents out in the field have of course done far more than I have, spending days interviewing victims and painstakingly reconstructing events — despite knowing that readers were all but certain to ignore the stories.

Simply put, the stories are out there but they often just get scrolled over.

Fisher also wrote about how his editor tried to make him feel better about the lack of response to a piece on Beirut in November, just before the Paris attacks. "Nobody is going to read this," the editor reportedly told him — and it wasn't a judgement or an attempt to call it a day looking for a great image to accompany the story, it's just the nature of the journalism game sometimes.

Social media and news bubbles are real things. Depending on who you follow and what you like to read on the Internet, certain news pops up based on your interests and past history. Have you ever compared the Google search results for the same terms with a friend of a different race or in a different country? It's shocking what turns up and how disparate the results can be. In that sense, it's easy to see how one might miss the news of a suicide bomber in the Ivory Coast if they're not regularly reading breaking world news. Is that ideal? No, but that's the way news spreads these days.

It's also easy to see that major cable news outlets, at least, cover certain events more heavily than others. Even when it comes to American politics, the coverage tends to be heavily biased towards ratings rather than social good. But that's their business model. Is that ideal? Absolutely not. Unfortunately, it's up to readers and viewers to seek out the smaller stories sometimes.

The fact that "no one is talking about Turkey" or other locations of terrorist violence isn't true. That readers and viewers tend to pay more attention when it occurs in some place they've been on vacation is also a little bit just human nature. It might be a good start to do away with the Facebook filters and official hashtags when violence occurs. Each and every attack, on any continent, is an affront to everyone's sensibilities. But the next time you almost scroll through a headline featuring a location you don't know a lot about, it might be worth stopping to take a look to read about what happened.