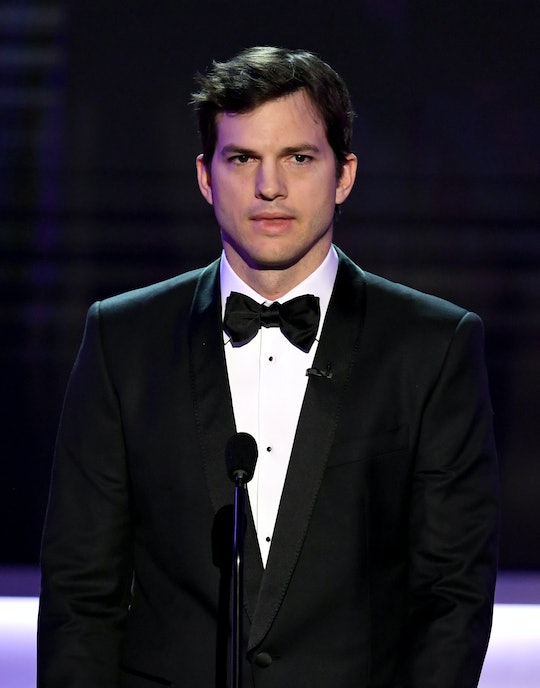 By now, most of us have seen the viral clip of Ashton Kutcher testifying last week on Capitol Hill about his firsthand experiences combating human trafficking via his nonprofit organization, Thorn. In his moving testimony, he described the horrifying reality of the dark web and how it's used to traffic children in the child sex trade, and how his nonprofit is trying to combat the trade with new technology that enables police departments and other agencies to find and rescue these victims.

As an advocate of this issue, and human sex trafficking in general, I can't tell you how important it is to me to hear and read about someone like Kutcher, who's known more for his rom-coms and role on That 70s Show, using his profile, time, and money to invest in ending a sickening trade. Celebrity or not, his testimony, filled with raw emotion and a moving speech, took great courage. Talking publicly about child sex trafficking is dark, scary, and no one wants to see their social-media feeds filled with it. The reality of what happens to children trafficked so young isn't polite dinner conversation. Talking about it means we have to acknowledge something so horrific exists, and if we acknowledge that it exists, what does it say about us as a human race that we're continuing to let it happen? It's a tough issue to digest, and an even tougher one to combat — especially when you're a parent raising young children in a world that promises to spare them no horror.

As a mother and parent of two young daughters, I can wholeheartedly appreciate where Kutcher is coming from and why he's taken such strong steps to make an impact to end this type of modern-day slavery. There's no easy way to say this, no way to sugarcoat it, but the fact that sex slavery still exists in 2017, and child sex slavery at that, is not only atrocious, it's downright disgusting. It sickens me to my core to think that there are places overseas and at home, right here in America, where children and women are trafficked for sex right under our noses. I can't help but feel a fear for my daughters, a fear that somehow, one day, this could happen to them. I know my girls are awarded a privilege to look the way they look and to live where we do, but considering something bad could happen to your child is a horrifying reality to consider, no matter how or where it happens.

According to the United Nations' 2016 Global Report on Trafficking, 51 percent of all persons trafficked were women, and the next highest category was children, at 28 percent. The report highlights that there are multiple reasons why humans are trafficked — ranging from forced labor to child soldiers — but the number one reason is overwhelmingly for sexual exploitation, and those percentages varied depending on the region of the world.

When I lived in Italy, I went through training that educated me in the harsh realities of human trafficking overseas through an organization called Mission of Light, which ministered to women on the streets who were currently being forced to work in the sex trade. Italy is Tier 1 for sex trafficking, according to the US State Department, because it's not only a perfect transit pipeline, but it's also a destination for thousands and thousands of travelers. Women are trafficked from Africa, Eastern Europe, and even Asia into Italy. Last year, the number of women trafficked from Nigeria into Italy alone doubled, and it's estimated that 80 percent of them are being prostituted, according to the International Organization for Migration (IOM).

I've seen the women on the streets in Italy, I've spoken with them, and because my faith is such a large part of what I do, I've prayed for them. They were once children full of hope, full of ideas of how their lives would turn out, and that was stollen from them, and it continues to be stollen from an estimated 4.5 million men, women, and children across the world who are trafficked into the sex trade, according to the International Labor Organization (ILO). The profitability of such a disgusting trade seems to far outweigh the conscience of many, to the point that it's legalized and taxed in many countries like Germany, the Netherlands, and the 47 other countries that have legalized prostitution. Though some governments and average people believe legalizing prostitution helps prevent sex trafficking, the fact is that studies have shown that in countries where prostitution is legal, there are actually higher rates of sex trafficking than in countries where it's illegal, according to the Harvard Law and International Development Society Does Legalized Prostitution Increase Human Trafficking? report.

Living in a country where human sex trafficking was widely prominent, and in my direct line of sight daily, was haunting. It wasn't like I watched a special about it on 20/20 and felt sorry for the plight of the people being trafficked. No; I saw it every single time I left my home, and every single day it both bothered me and frightened me. I began to ask myself questions, like what made me so different from the women who had been forced into this? Why was this something that was largely ignored by Italian society? Why didn't it bother them as much as it bothered me? I discovered through conversations with Italian friends that it wasn't something they really talked about because there was a fear in them as well.

Months later, I think about Jennifer and Joanna often, wondering if they'll ever be free. Their parting words to me were, "you're OK with us." I hope I gave them just an inch of that in return.

Forced prostitution rings are tied to the mafia, and in Italy, no one wants to deal with the mafia. I was a stay-at-home mom who always had my two kids with me, so even though my heart hurt for these women whom I truly wanted to help, I was afraid that if I stopped my car to talk to them, I'd be putting my family in jeopardy.

Though I never got to work with Mission of Light in the way I'd hoped, my training was invaluable to me. Not only did it educate me of the realities of human trafficking, but I learned how I'd likely go about approaching these women if I were to choose to do so on my own, even though MOL doesn't recommend doing so. One day, after many months, I finally got the courage to approach some women in my local town after a friend recommended I go to them bearing gifts. So, that's just what I did. I made a couple of gift bags for a pair of women I'd driven by day and night for over a year and gave it to them one Saturday evening. I can't tell you how nervous and scared I was; I could feel every nerve in my body dancing around, wondering if they would talk to me; wondering, too, who would be watching.

Jennifer and Joanna, as they introduced themselves to me, were from Nigeria and Ghana, respectively. And as I stood there, shaking in my boots and offering them gifts, I wondered how silly I looked to them. Here I was, this white woman with long blonde hair, smiling and talking to them as if we weren't standing on a street corner in a known prostitution area as Italians drove by and honked at us. I was struck by the beauty of both women. They were not pariahs, not lepers, not people who didn't "deserve" love, happiness, and freedom — they were nothing like the pictures of prostitution we're taught to believe.

If our children are the most important, precious, innocent people in this world, why aren't we fighting like hell to keep them safe?

Now, months later, I think about Jennifer and Joanna often, wondering if they'll ever be free. Their parting words to me were, "you're OK with us." I hope I gave them just an inch of that in return.

My experience is such a huge part of the reason why hearing people like Kutcher speak out about these issues means so much to me. For a person like him to use his high-profile status to talk about the fact that modern-day slavery is still taking place, and for him to lobby our government to treat the sexual exploitation of men, women, and children like any other "war" brings that fear stateside for me. If our children are the most important, precious, innocent people in this world, why aren't we fighting like hell to keep them safe?

When Kutcher spoke about his children, you could hear the heartbreak in his voice. The things I learned in my training and saw on the streets haunt me to this day, and I think about them when I look into my 4-year-old's innocent eyes, or when I hear her sweet laughter. This issue burdens me so much that almost not a day goes by that I don't think about the fact that there is a 4 year old like her somewhere in Cambodia or Thailand, groomed for the sex trade. It reminds me that the fight isn't just overseas, it's here too, and Kutcher's efforts inspire me to look for ways that I can help here too. I've signed up to volunteer through Thorn's website, and am looking for ways I can contribute locally here in Washington where we live.