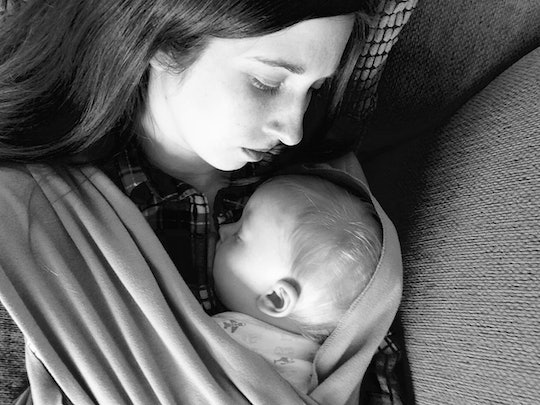 When my husband and I decided to start a family, it soon became very apparent that not everyone thought I was ready to be a mother. I was only 22 when my son was born, and some friends, family, and even strangers had voiced their concern over my age throughout my pregnancy. Regardless of their opinions, I felt ready to be a mother. I was excited and looking forward to this new chapter of my life. So when depression hit me like a ton of bricks, I wanted to hide it from the world. I felt like I couldn’t tell anyone about my postpartum depression because I was a Millennial mom, so I didn’t.

I spent so long wanting to be a mother and thinking that I would be naturally good at motherhood, that my postpartum depression caught me completely off-guard. Of all the horrific things I had read in the back section of What To Expect When You’re Expecting, postpartum depression was the one area I glossed over. I thought there was no way it could happen to me. It just couldn't. I was too happy about my pregnancy, I was too ready for the arrival of my baby boy, I was "too prepared" to fail. But I was so, so wrong.

I wanted to prove I was ready for motherhood, and admitting the toll it took on me would only prove what I feared others already thought: that I wasn't ready. That I was too young.

I know now that I had no control over my postpartum depression, but at the time, I felt like failure. It felt like day after day of failure. I wasn’t the mother I envisioned myself to be. I wasn’t happy. I didn’t know how to calm and soothe my baby. He fed off my negative energy. As I grew increasingly panicked, so did he. My fear and anxiety became his fear and anxiety, and round and round we went. It was a vicious cycle that I couldn’t break.

I spent my days crying and sometimes locking myself in my room for a few minutes of respite, wishing I could tell someone — anyone — how I felt. I would tell my husband how hard it was, but he thought I was talking about the normal hardships of parenthood: the exhaustion, the cluelessness, the busy boredom. He didn’t see me at my worst. No one did.

I didn't tell anyone about my postpartum depression because I was afraid of the judgment I'd receive if I so much as asked for help with the dishes, let alone for my mental health. I wanted to prove I was ready for motherhood, and admitting the toll it took on me would only prove what I feared others already thought: that I wasn't ready. That I was too young.

Part of me wondered if this was just what motherhood was like. I'd look at the social media pages of women with kids that I knew only from a distance and thought perhaps we were all simply keeping up some sort of elaborate charade that no one talks about. As if motherhood was some sort of secret club of suffering with an unspoken rule that we only mention the good things. Maybe everyone feels like this, I thought. Maybe we’re all lying about what it really feels like to be a mother.

Once I realized something was wrong, I wanted more than ever to hide it.

I wanted so badly to ask someone if this was true, but as time went on, I felt sure it wasn’t. No one would have another child if they felt pulled this strongly between anxiety and self-hatred and love. No one could ever in good conscience tell a childless woman on the verge of taking the plunge into motherhood that it was “so worth it” without mentioning this kind of soul-sucking darkness.

Yet, once I realized something was wrong, I wanted more than ever to hide it. I didn’t want to give anyone the satisfaction of being right about my inability to mother. I already felt insecure about how I was doing, and feeling mentally unstable came with so much shame. I was ashamed of the fact that I cried over my baby not sleeping. I was ashamed of how ill-equipped I was to deal with the hours of screaming. I was ashamed of the way I broke down mentally, sometimes before I even got out of bed in the morning.

When I look back on that year, I wonder what life could have been like if I felt confident enough to reach out for help.

I still wanted, so badly, to be good at motherhood. But I didn’t know how to change or how to admit that I needed help in order to change. I was so paralyzed by fear of what others would think and so entrapped in the fog of depression that I couldn’t see how counterintuitive it was to stay silent. I felt that by admitting my struggle I'd be admitting "defeat"; only giving people more reason to think that I was too young and naive to become a parent. I know if I had reached out and got the help I needed, I could have been a better mother.

The stigma of young motherhood paired with the stigma of mental illness was too much for me to bear. I didn’t admit that I was struggling with postpartum depression until I was already coming out of it naturally, well over a year later. Even then I felt nervous admitting it, wondering what untold repercussions might come as a result of my confession.

When I look back on that year, I wonder what life could have been like if I felt confident enough to reach out for help. I wonder how different that first year might have been, and I think about how I might have enjoyed my son’s infancy instead of wrestling with depression the entire time. All the shoulda, coulda, wouldas weigh heavy on me, and the knowledge that things could've been different is sometimes too much to bear. I often wish I could go back and tell myself I was just as good as anyone else, but I wasn’t meant to go down this journey alone.