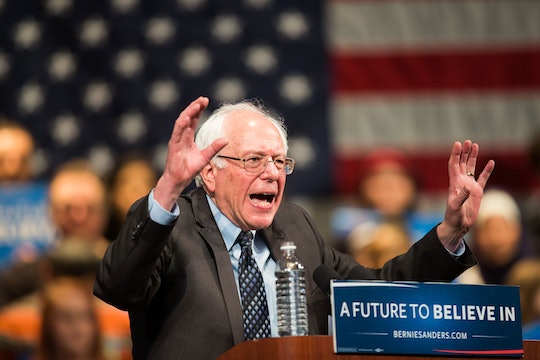 Things hadn’t been looking so great for Vermont Sen. Bernie Sanders prior to his big win in Tuesday’s Michigan primary. Although he has built a solid campaign that has held strong thanks to some major grassroots support, once Clinton won big on Super Tuesday, it seemed basically inevitable that she’d be nominated as the Democratic candidate. And that’s why Bernie Sanders’ Michigan win is a big deal: heading into the Michigan primary, polls predicted that Clinton was ahead — some showing her with as much as a 20-point lead, according to the Washington Post — and many assumed Sanders didn’t stand a chance. But by upsetting Clinton in Michigan — a large, politically-important Midwestern state — Sanders proved he’s still a forced to be reckoned with, even if Clinton does still go on to eventually nab the nomination.

In fact, Sanders’ Michigan win isn’t just a big deal, it’s the biggest deal to date for his campaign, according to Forbes. Clinton has been winning big as of late, especially in Southern states, which made it even more crucial for Sanders to prove he could win in the Northern states and the Midwest if his campaign were to continue. And given the fact that most people were expecting him to lose, his win was pretty shocking for everyone involved.

Pundits analyzing Sanders' unexpected victory are looking at his strong opposition to controversial trade deals as one of the reasons behind his win, as it's an issue that Michigan voters in particular care a lot about, according to TIME. As a manufacturing-heavy state struggling with massive job loss and unemployment, Michigan Democrats (and white, working-class voters in particular) are likely attracted to Sanders' pro-labor message. Sanders has received endorsements from a number of trade unions and organizations such as The Working Families Party and National Nurses United, who have helped to mobilize working-class voters concerned about issues of employment and job security, as well as to raise funds for his campaign (National Nurses United has spent $1.9 million supporting the Sanders campaign, according to TIME).

Sanders also won greater-than-expected support from black voters in the state (30 percent, according to TIME), which is of particular significance, as he hasn't fared very well with black voters in the South. Even in Michigan, however, Clinton continued to out-perform Sanders in that demographic.

His major win aside though, it is unlikely that Sanders will be able to gain enough delegates to beat Clinton to the Democratic nomination, according to the New York Times. Winning in Michigan does mean that Sanders might be able to see similar success in other industrial states (Ohio, Missouri, Illinois, Pennsylvania, Indiana), which would also call into question Clinton's assumed easy wins in other states, like California and New York. But according to the New York Times, even further upsets like those probably won't be enough to really make a difference overall, since she's already earned such a signficant share of delegates:

Forty-three percent of all of the pledged delegates to the Democratic National Convention have already been awarded. She’s won those delegates by roughly a 60-40 margin.

And, thanks to proportional delegate rules, it's unlikely that Sanders will be able to offset that lead, even if he continues to win. But, there's no doubt that Sanders has continued to do better than expected — and that he has certainly proven to be a very strong competitor who will definitely not go down without a fight.