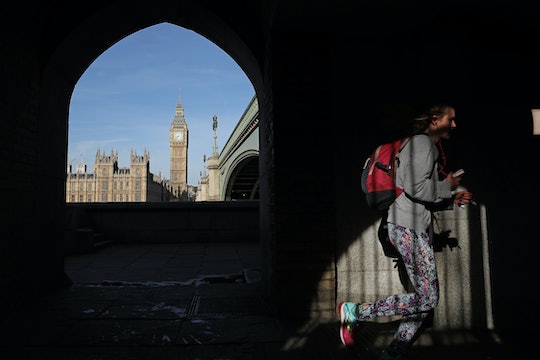 Blaming Islam For The UK Parliament Attack Is So Wrong

In the immediate aftermath of the March 22 attack on the UK Houses of Parliament in London, many immediately defaulted to blaming Islam for what happened in England. Though the knee-jerk reaction has become the norm, blaming Islam is the wrong response to the UK Parliament attack. Not only is it an uneducated response to what's going on in London at present, it's largely problematic to assume an entire religion is at fault for an attack committed by free-thinking individual(s). Rhetoric that slams the religion and claims "Islam is to blame" for whatever chaotic state the world is currently in spreads almost as quickly as news of these devastating attacks does, and what happened in London on March 22 is yet another shining example of that.

Shortly after the attack in Paris in November of 2015, news spread far and wide that Islam wasn't to blame for the Paris attacks. When the attack Brussels attack took place months later, in March of 2016, Islamophobia took off in the worst possible way. In a statement delivered by Republican Sen. Ted Cruz chastising then-President Barack Obama's response to the attack, Cruz said:

We need a president who sets aside political correctness. In the wake of Brussels, we don’t need another lecture from Obama on Islamophobia. We need a commander-in-chief who does everything necessary to defeat the enemy, and we need to immediately halt the president’s ill-advised plan to bring in tens of thousands of Syrian Muslim refugees.

To point concisely: the oversimplification that a religion is to blame for the terrifying actions of individuals not only ignorantly misses the point — it illuminates just how deep-seated our racial and religious bias runs.

Investigating an attack on harmless individuals as a "terrorist incident," like the London Metropolitan Police are doing, is not synonymous to: "We think this is Islam's fault." Shortly after the attack on AME Emanuel Church, the question of whether we should define the Charleston attack as "terrorism" was the topic du jour — in large part because Dylann Roof, the convicted gunman, was a white man. At present, police have not identified the alleged attacker involved in the UK House of Parliament attack. But that hasn't stopped many from immediately taking to social media to assume blame should fall on on practicing Muslims.

The bottom line is that blaming individuals when it's convenient to your narrative (the narrative being that anytime a terrorist attack takes place it's the fault of Islam and practicing Muslims) is literally the embodiment of fake news. Any appropriately educated individual is going to wait for the full details to come out before forming an opinion based on the facts in front of them.

And even after the facts roll out, it's often impossible to infer that any one thing motivated a person (or a group of people) to take the lives of defenseless others. Of course, they can claim they were motivated by this thing or that thing, but that's not a direct link between the teachings of a religion to the actions of free-thinking individuals.

Doing so, and even worse, continuing to do so, perpetuates a dangerous stereotype rooted in baselessness that we should all be ashamed of.