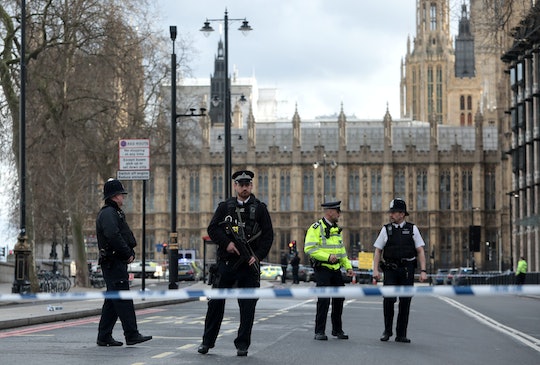 On Wednesday, at least four people — including one attacker — were killed and 20 people were injured during an attack on Westminster Bridge in London, according to The Guardian. A police officer was stabbed, gunshots were heard near Parliament, and several pedestrians on Westminster Bridge were hit by a vehicle before it crashed into nearby railings. An investigation into the incident is underway and police are currently treating the incident as a terrorist attack, but online, some have already begun blaming the U.K. Parliament attack on mental illness. Without proof to back up that reasoning, however, that's a claim that hurts many: It stigmatizes mental illness, which is rarely the cause of violence, and it keeps society from looking at the true motives behind attacks, which are often more complex than a single mental health diagnosis.

It's understandable why people would like to blame mental health, of course. Many people grew up watching movies that distort mental illness to create villains (think Psycho, The Shining, Halloween) and have bought the entertainment industry's narrative that mental illness equals violence. And when watching true-life horror play out in the news, it's easy to assume that something must be wrong with the attackers, because widespread violence doesn't seem like it should be a rational response to anything. So it must be mental illness, no?

But the truth of the matter is, the vast majority of violent incidents have nothing to do with mental illness. According to a 2015 study published in the Annals of Epidemiology, only 4 percent of violent incidents in the United States can be linked to mental illness. And while serious mental illness can slightly increase a person's risk of acting violently, so can being male, younger, poorer, or having issues with drugs or alcohol — whether or not people from those demographics have mental health concerns.

As the authors wrote in the study:

When persons with mental illness do behavior violently, it is often—although not always—for the same reasons that non–mentally ill people engage in violent behavior. In short, violence is a complex societal problem that is caused, more often than not, by other things besides mental illness.

"We don’t understand how someone could carry out an act of violence," Wendy Giebink of the National Alliance on Mental Illness told KSOO in 2015. "It’s easy to pin it on something that’s convenient. We’re missing something when we do that."

Just like many people's approach of pinning attacks on Muslim individuals, it's the wrong approach, and it skips over important questions society needs to answer. Does a perpetrator have easy access to weapons? That increases risk of homicide. Do they have a dependence on alcohol or drugs? Have they ever acted violently in the past, or do they come from a violent background? Were they emotionally distressed, socially rejected, facing a lack of opportunity?

Jumping to the assumption that someone violent is mentally ill ignores the intricate, nuanced reasons that lead to horrific incidents like the one at Parliament today. It also further stigmatizes those who are already much more likely to be on the receiving end of violence from others, and who are far more likely to harm themselves than anyone else.

Details are still emerging from London at the moment, and it might be a while before the public knows exactly what led up to the attack on Westminster Bridge. Until then, however, perhaps it's best to avoid jumping to conclusions about a person's mental health and perpetrating unhelpful stereotypes.