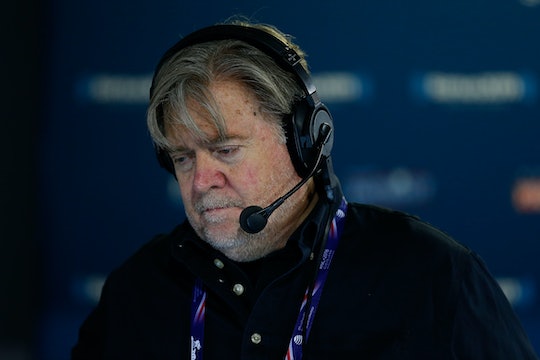 It's been a solid week since Donald Trump was elected the next President of the United States. After almost 18 months of outrageous statements and mudslinging, we could finally put to rest the insanity that was Election 2016. Not so fast, America, because the WTF hits just keep on coming. The latest "are you kidding me?" moment du jour: A recently discovered email exchange from December 2015 in which Steve Bannon — the man pegged to be Trump's chief strategist and White House advisor — wrote, "I’ve got a cure for mental health issue[s]. Spank your children more." While there has been plenty of outrage at Bannon's remarks, there have been more surprising responses as well: Most notably, parents bragging about spanking their kids. Folks, this is not OK on a whole lot of levels.

These responses and comments across both Twitter and Facebook were strangely proud and often self-righteously justified. Take for example this tweet from @AfterlifeHacked: "As quoted in the Bible. I would agree as long as it [spanking] is done with reason and love." Ah yes — nothing says reason and love like hitting your kids. But let's take religion out of this discussion entirely: Spanking is not the answer to mental health issues — there's even science to back that up. So when you brag about spanking your kids, it really isn't something to be proud of — and here's why.

In 2012, the American Academy of Pediatrics published a study that showed spanking's relation to mental illness. The AAP's stance on spanking is one that "strongly opposes striking a child for any reason." In 2016, the findings linking mental health issues with spanking were again reiterated with the publication of a massive meta-analysis of spanking studies — 75 studies, to be precise, spanning more than 50 years of data collection. The results were alarming: Spanking can cause lifelong issues for children. Several behavioral and emotional issues, everything from depression, aggression, antisocial behavior, and low self-esteem, were more commonly found in children who had been spanked.

I can already see some of you raising your eyebrows: Is spanking child abuse? Well, it all depends on who you ask and what the law says about spanking — and what those laws say is usually lacking in specifics. This debate on whether or not spanking is child abuse became more prominent during the Adrian Peterson case, as the NFL running back was charged with child abuse for hitting his 4-year-old son with a switch in 2014. Medical director Dr. Neha Mehta, speaking to The Times-Picayune, noted that spanking can lead to more serious abuse:

In most cases, the parent is not intentionally trying harm their child. But in the heat of the moment, out of frustration or a lack of response from the child, parents can injure their child without knowing it's happening.

Whether you agree that spanking is child abuse doesn't matter: Spanking teaches children that violence is the answer, and encourages the cycle of violence and abuse. The abused becomes the abuser.

Let's remember where this all started: Steve Bannon — the man who will have the ear of the president for the next four years — condoned spanking children as a way of dealing with mental health issues. Did you also know that Steve Bannon was charged with domestic violence himself? (The charges were ultimately dismissed. Bannon has not responded to requests for comment.) Parents bragging that they spank their children, or that they were spanked as a child and "turned out alright" only reinforces Bannon's backwards notions about child discipline while implicitly supporting him in his all-too powerful role within the Trump administration.