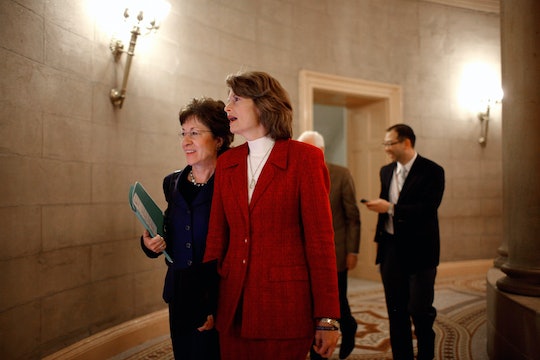 On Friday morning, Republicans in the Senate failed to pass an Affordable Care Act repeal bill that ultimately concluded with a 49-51 vote, with three Republicans breaking ranks with the majority of their party to vote against the bill. On Friday, these senators — John McCain of Arizona, Susan Collins of Maine, and Lisa Murkowski of Alaska — are being lauded as heroes. But the Republicans who voted against ACA repeal or reform aren't "heroes," because all they did was make a sensible, moral decision for the good of their constituents. And that's what every single senator should have done in the exact same situation.

But if you perused every other headline published today about the bill's defeat, you probably saw that a good number of them called Collins, Murkowski, and McCain just that — heroes.

And though McCain voted yes on proceeding to debate the bill in the first place, he's gotten most of the credit for thwarting it. Then, on Thursday night/Friday morning, when reporters curious about his stance on the "skinny repeal" asked how he would vote, he told them they'd just have to "wait for the show,” as if the American government has legitimately become a reality TV show.

And while Collins and Murkowski have maintained their opposition to recent GOP plans to repeal or replace Obamacare, they shouldn't be let off the hook either. Because the decision to not kick millions of Americans off of their insurance isn't a heroic one — it's a humane one. The bill was bad health care policy, and no one should have supported it in the form it was on Thursday night.

All three senators had their reasoning for voting against the bill. Collins, in an official statement, said that while she supported parts of the plan, she didn't support the approach senators took to vote on Friday. According to The San Diego Union Tribune, she said:

We’re dealing with an issue that affects millions of Americans and one sixth of our economy, and we need to approach reforms in a very careful way. That means going through the regular process of committee hearings; receiving input from expert witnesses such as actuaries, governors, advocacy groups, and health care providers; and vetting proposals with our colleagues on both sides of the aisle. It needs to be a much more deliberative process.

But shouldn't consulting people like health care providers have been a given from the start? Why wouldn't advocacy groups and others directly involved in health care have been involved more from the very beginning? These seem like common sense assumptions, and it's strange that they would seem radical or heroic, especially coming from an educated elected official.

Over at The Mary Sue, writer Marykate Jasper rightfully pointed out that it was regular people — like protestors calling their senators, disability rights activists, and progressive voters and organizations such as Indivisible, the Town Hall Project, and the Democratic Socialists of America — who should be called heroes following the vote. She may have put it best when she wrote:

Being an active, informed citizen of a democracy in a system which actively discourages you from participating, which relentlessly makes you aware of how outnumbered you are and how little your Tea Party representatives listen to you, is a miracle of civic duty.

Because while Collins and Murkowski have fought against this health care repeal from the start, and McCain finally voted against his party in the end, it's voters and activists who have been doing the real work for months. They are the true heroes. Not senators who decided against stripping health care from their constituents, which should have been a no-brainer anyway.

It's incredibly sad that making a compassionate decision for American citizens is seen as a departure from Republican Party tenets at all. When legislation is as bad as the "skinny repeal" was, members of the Republican Party shouldn't just vote for it to fall in line with their peers. That's a dangerous precedent, and one that isn't good for the constituents who count on them to do the right thing — even if that means breaking from their party and the party of the president.

Since when do we accept the bare minimum from our representatives, then applaud them for it? Is it really that heroic to vote in your constituents' best interests, especially when so many of them have contacted you to express their stance and their needs?

So don't break out the David Bowie lyrics for a dramatic video montage featuring Collins, Murkowski, and McCain just yet. Voting against the ACA repeal wasn't a heroic act — it was a decent, moral, responsible one, and as the health care reform debate continues, we shouldn't forget that.