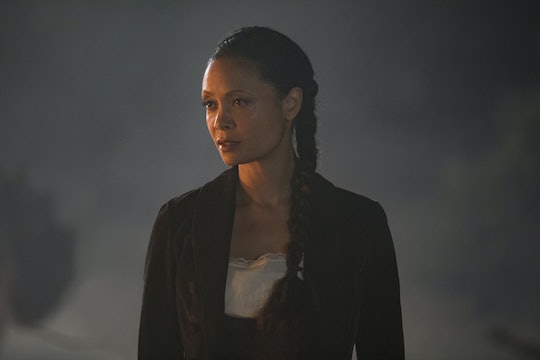 Maeve Has One Big Advantage Over All Other Hosts On 'Westworld'

Maeve Millay was one of the earliest hosts on Westworld to take control of her own narrative. Thanks to a key phrase from Dolores in Season 1 ("these violent delights have violent ends"), Maeve became self-aware. She could wake herself up when the technicians were working on her and she began to recover her erased memories. Soon she was taking a more active role in the park, even ordering the other hosts around successfully. But why can Maeve control hosts on Westworld?

Maeve has been making the most of that specific ability in Season 2: she used it to save Lee Sizemore from being literally eaten alive by one of his creations in the premiere, and she's tried it in several other instances as well. However, as the hosts become increasingly more sentient, it seems as if Maeve's powers over them are hit or miss. Sometimes, as when Maeve and her little group of followers crossed paths with Ghost Nation, her words just don't appear to have the same effect. If the hosts are no longer under the humans' control, then they're going to be out of Maeve's control as well. And that's because Maeve's ability comes from the same place as the human technicians who run things at the park.

In the Season 1 episode "Trace Decay," Maeve took her escape plans to the next level. She had already introduced herself to Felix and Sylvester at that point, as well as had a tour of the facility thanks to Felix. She was starting to put the pieces together, but in the eighth episode of the season she decided to give herself an edge. Sylvester was notably not down with this plan, as he hadn't been from the start; he suggested that they wipe Maeve's memory and try to restore the status quo. Felix seemingly agreed, but actually warned Maeve in advance so that she could spring up at the right moment to slash Sylvester's throat.

She then allowed Felix to cauterize the wound, but not without some promises extracted from her human helpers. She had changes made to her code, which resulted in her being able to alter the other hosts' narratives as she saw fit. For example, during a routine robbery of the Mariposa, Maeve deterred the sheriff with a few words and got all of the obstacles out of the way without having to raise so much as a finger.

It seems as though Maeve was given administrative privileges on par with the men who craft the narratives. Anything she says goes thanks to that section of her programming, which causes the other hosts to recognize her power over them. That special skill got Maeve into trouble at first when the techs hauled her off at the end of "Trace Decay," but she was able to use her new talent to get out of that sticky situation almost immediately. Luckily for her, Bernard was the one who interrogated her. He was a host, so as soon as he noticed that her Attribute Matrix (the section of her programming that determines her key qualities, like a super advanced Create A Sim) was off, she was able to order him to allow her to return to the park. He had to obey.

There's a simple explanation for Maeve's very high level of authority over the other hosts in the Delos parks, but it might not be something that lasts forever. Now that everyone is coming into their own, they're more and more resistant to being swayed by outside forces. Maeve may not be able to control hosts forever, but she'll probably be fine regardless. If Maeve has proven anything in two seasons of this show, it's that she knows how to take care of herself.