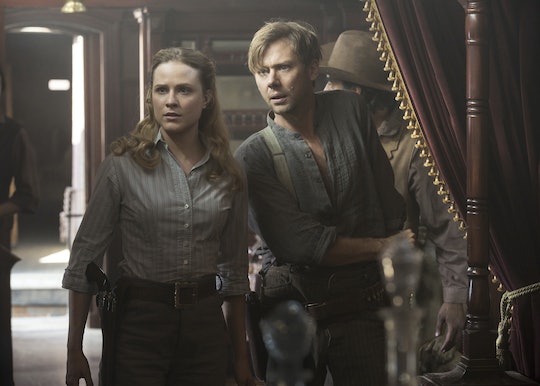 Why Can't Guests Kill Guests In 'Westworld'? The Bullets Are Specially Made

In Westworld guests get to live out their wildest fantasies. They can be the hero that saves the damsel in the distress or the villain that causes havoc. They can have sex with prostitutes or kill hosts for no reason. However, guests can't kill guests in Westworld, at least not with a gun anyway. Fans have seen hosts try to kill guests by shooting their guns, but the bullets either seem to bounce right off them, like with the Man in Black, or just leave a bruise, like with William. Either way, unlike with the hosts, a guest cannot be killed by a bullet wound and here's why.

Jonathan Nolan, one of the creators of Westworld, explained to Rotten Tomatoes that the guns work perfectly fine, however, it's the bullets themselves that are harmless towards the guests. "In the original [Westworld] film, the guns wont operate guest on guest, but we felt like the guests would want to have a more visceral experience here," Nolan said. "So when they're shot it has sort of the impact. They're called simunitions. The U.S. military trains with rounds like the ones we're talking about. But there's a bit of an impact, a bit of sting. So it's not entirely consequence-free for the guests."

It's still unclear why these bullets break the skin of the hosts and not the guests, but maybe that has to do with how the hosts' skin is made. Maybe they're purposefully made so that they can be easily wounded, unlike humans. Whatever the case may be, there is a major issue with the parks "simunition" idea. If the guns work perfectly fine and the only thing saving the guests from being fatally shot are these safe bullets, then what's to stop someone, or some host, from getting real bullets and replacing their gun with actual ammunition?

On last Sunday's episode, Elsie discovered that someone has been tampering with the hosts so that they can not only lie to humans, but they can also harm, or even kill, them. Add that to the fact that Maeve just had her perception turned all the way up and it wouldn't take all that much for a host to figure out what needs to be done to kill a guest.

It looks like the humans on Westworld may have a lot of trouble on their hands fairly soon and if they aren't careful they may just find the hosts turning on them in a big way. Honestly though, the guests and workers at Westworld kind of had it coming.