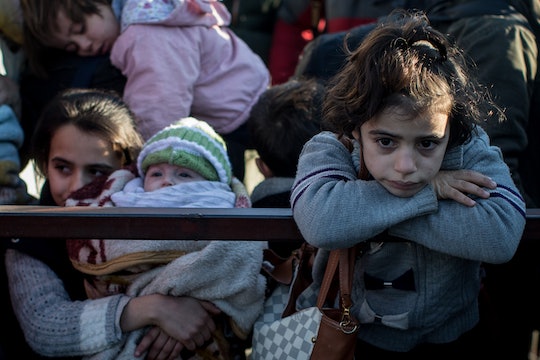 Why Chemical Attacks Like The One In Syria Hurt Kids More

A reported chemical attack in Syria on Tuesday killed an estimated 20 children out of the total 72 young victims. The attack was an atrocity, but even worse, chemical attacks hurt children more (which shouldn't come as too much of a surprise) exacerbating an already terrible situation. It makes sense — children are tiny people and their bodies are more vulnerable. Given that they're already living in a war zone and their immune systems are likely already compromised, a chemical attack is harder for them to live through.

Dr. Sandro Galea, an emergency physician and epidemiologist at Boston University who studies trauma and conflict, told NPR that children also can't run away to safety as quickly as adults and once the chemicals are in their systems, there's little chance of survival. Even if they weren't already compromised by living in a conflict zone and through what amounts to a famine, their immune systems are just less mature. "It makes them more vulnerable, immunologically and physically," Galea said.

Groups like Doctors Without Borders believe that Tuesday's attack was sarin gas, which fills up a person's lungs and causes them them to suffocate. Children's lungs are smaller, so the gas works more quickly than it does on adults. It's awful, because basically children don't stand a chance in chemical warfare.

If they do survive somehow, children will live the rest of their lives suffering from various ailments and illnesses. The toxins stay in their body and can affect neurological and physical development. And that's just the physical effects. Children growing up in a conflict zone like Syria and witnessing a chemical attack — where victims can seize and foam at the mouth — can develop PTSD and other stress disorders, especially if they've lost family members. One man, for example, lost 25 of his relatives in the attack on Tuesday. Imagine being a kid and having to deal with the ramifications of that.

One doctor told ABC News that many children hurt in the attack arrived at care facilities dead or with lesions and runny noses, which are symptoms of a gas attack. Others were injured after being discovered under the rubble. Dr. Abdulhai Tennari said:

Fighting in Syria has been going on for six years, so many children there have known nothing but conflict. "Toxic stress affects brain development, learning and the social emotional ability to regulate one's own behavior," Lindsay Stark, a researcher at Columbia University told NPR. Then again, children are also tough AF and are capable of bouncing back from toxic stress. American parents try to teach their children resiliency, according to Psychology Today, but Syrian children are learning it all on their own.

There's reason to be invested in the prospects of Syrian children, since assuming they are a lost cause hurts them even more. But these tragic, violent chemical attacks can't keep happening. The world's asking Syrian children to deal with too much already.