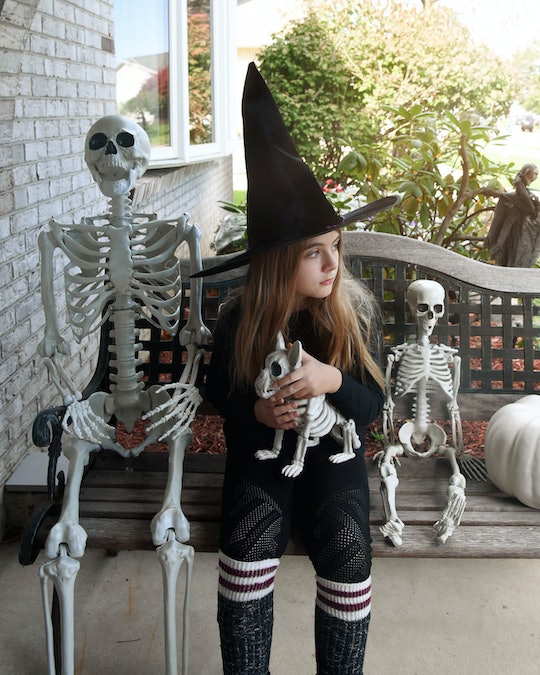 My daughter’s second word was “boo” (her first was “dog”), and this referred to all things Halloween — witches, monsters, and eventually, exclusively, skeletons. At 14 months, she tramped around my apartment, clutching purple, toddler-sized skeletons that shed glitter everywhere, muttering streams of gibberish that were punctuated by excited “boos!” Naturally, I expected her to embrace Christmas and all its lights and shiny gift wrap with the same fervor; she did not. When presented with Rudolph’s blinking nose or a severed head, she chose the severed head every time. My child simply loves dead things.

As she got older, her passion evolved. Nursery rhymes like “Three Blind Mice” have been spookified to “Five Creepy Spiders.” At the library, she pulls books featuring the most repellent monsters off the shelves, and her tiny body grows tense as she curls into me for a creepy reading of Lemony Snicket’s The Dark. She owns three witch costumes, two broomsticks, and countless wands, and her great passion is running the loop of our railroad-style apartment with a broom between her legs, waving a wand and hollering “Hex!” Usually at my husband. “You’re a pebble!”

So, why Halloween? The fascination began long before my daughter had even tasted candy. It’s no coincidence that toddlers become interested in raggedy corpses, says Margee Kerr, sociologist and author of SCREAM: Chilling Adventures in the Science of Fear.

“As kids come into the realization that their body can feel so intense sometimes (scared, angry, hungry, tired), and ultimately they're the one who has to figure out how to manage it,” Kerr explains to Romper. “It's a lot of power that can feel pretty scary, if that makes sense.”

In an article “Why We Love to Be Scared,” for Psychology Today, Margee Kerr previously wrote about the biological mechanisms at work: “The combination of friends, thrills, chills and spooky things thrusts our body, namely the emotional processing centers in our brain (amygdala, insula, prefrontal cortex, hippocampus) into a perfect state for encoding layered and strong memories.” Scary moments trigger endorphins, serotonin, oxytocin, and dopamine — neurotransmitters we also experience when we’re “happy, excited, and surprised.”

Even though we may know something may not really hurt us, like a haunted house or scary movie, it still can feel like a win to face something aversive and survive.

So our uncivilized little dictators are human, after all. Their hysteria and excitement is often simply an unchecked response to the brain’s normal chemical processes. But not all children, or adults for that matter, enjoy having the socks scared off them, and there’s science behind the why. In The Atlantic’s “Why Do Some Brains Enjoy Fear?” writer Allegra Ringo presents research from David Zald that names dopamine as the prime determinant as to whether or not we like to be safely scared. For decades, Zald has researched receptivity to dopamine in humans, tying it to novelty-seeking traits and propensity for drug addition. My toddler seems to lack a strong brake system in general, so it’s no surprise that she falls into the reckless dopamine-release group.

On her third birthday, we went to Coney Island. She’d been begging me all summer to take her on the haunted house ride, and although I strongly suspected it would end in tears, I caved and bought two tickets for “Laughing in the Dark.” It clearly hadn’t been updated since the last time I’d ridden, back in the 1980s, so for a brief moment, I entertained the hope that my daughter would be alright. She was not alright. She clutched my arm, weeping and shouting, “Take me back the light” the entire three minutes and 30 seconds. She bounced back quickly with the help of an ice cream cone. None of this was surprising.

What stunned me happened 24 hours later, when my sister asked her, “What was the best part of Coney Island?”

My daughter’s eyes lit up and she cracked a frightened smile. “The haunted house ride!”

Kerr, the sociologist, explains to Romper that beyond the dopamine hit, overcoming a scary situation can be empowering for children. “Even though we may know something may not really hurt us, like a haunted house or scary movie, it still can feel like a win to face something aversive and survive. For kids especially, making something scary ‘fun’ offers just enough distance to engage with it, make it feel a little more in their control, and make them feel like they have gained a sense of some mastery over something unknown.”

That certainly gives some perspective on the ferocity of tantrums. But again, I am not surprised to learn that the child who dictates every move I’m permitted to make when we “play” is attracted to scenarios that offer her an illusion of control. Although we may feel like our children control our lives, the 2- and 3-year-olds that fill our days with hugs and screeches have very little agency. We are the all-powerful masters in this dynamic, controlling everything, from what shoes they wear to how they spend their days to what they eat for dinner.

Of course the prospect of tying on a cape, waving a wand and turning us into inanimate objects, or feeding us to werewolves, excites them.

That is, if they adopt the “bad witch” personality. If there is one subject my daughter never tires of exploring, it is that of who is “good” and who is “bad.” Instinct tells me she already suspects that our moral universe is largely composed of gray area, and that this unsettling truth drives her need to redefine the dichotomy of good and bad every single day, as if she’s making sure it’s still there to hold her.

This is a common scenario.

My daughter wants to be a “bad” witch, and at the same time, is terrified of the “bad” witch.

I might be going out on a limb or a broomstick or whatever, but I think what we’re really afraid of when we fear witches is being our own empowered selves.

Part of this fascination arises from our children’s expanding comprehension of what constitutes right from wrong. “I think that doing scary things and dressing up like scary characters is in a lot of ways a challenge, or at least exploration, of what is scary, and why,” says Kerr. “What is it that they [witches] do that threatens us in some way? It opens the door to questioning who decides what is good or bad. Is it based on someone’s actions, the consequences of those actions, or just the very nature of a person? Kids get to push the limits of social norms, tip their toes into the taboo and see what it feels like, or what all the ‘fuss’ is about.”

Putting on a mask for a moment allows kids to reinforce their sense of self, she says.

The ability to transform yourself, others, or the world around you is powerful indeed. Brooklyn mom, witch and writer Mya Spalter, author of Enchantments: A Modern Witch's Guide to Self-Possession, offers her wisdom on the power of the witch as cultural icon. “I might be going out on a limb or a broomstick or whatever, but I think what we’re really afraid of when we fear witches is being our own empowered selves,” she tells Romper. “And I don’t mean that we’re afraid of our powerlessness against death gore and injury, or our own ability to harm others or see them harmed, which is scary enough. I think we must be afraid of our own power, because that’s what the witch represents.

Although my daughter complains, frequently, that her broomstick is broken because it doesn’t fly, what would happen if it did lift off the ground? Would she cackle and wave as she jetted across the sky? For all her griping that her wand is “just pretend,” how would my child feel if she could transform her parents into frogs, or rocks, or “poopy butts?” As our children grow up, power transforms from magic into responsibility, and responsibility is scary; “real” scary, unlike the safe fear that haunted houses and horror movies offer. In fact, we often use these safe scary scenarios to escape from our real fears.

And so we come to the elephant in the room: death. Skeletons, zombies, vampires, ghosts — all figures that reanimate the post-mortem body. We fear these figures, yet we long for them to exist. For if ghosts are real, then surely we, too, have a chance to hold onto our consciousness after we enter the great unknown. What better way for our children to grapple with their budding awareness that one day, none of us will exist, than through the safe-scary figures that dominate the Halloween landscape?

Kerr offers some perspective on how it is, quite simply, human nature to create stories when we don’t have answers. “Death is the ultimate unknown … we can't imagine what it is like to not be ‘us,’ to not have an inner dialogue and sense of self. Just when kids are figuring out that they have this whole inner world that is only theirs, they’re also typically being introduced to the idea of the permanence of death.”

Which is where the ghost stories come in. “We're so uncomfortable with uncertainty, we’ll make up stories in the absence of knowledge and experience — and not always because we want to reduce anxiety or fear, but because our imagination can't help but fill in the blanks,” she says. “A story gives our mind something to walk on.”

So when my daughter insists on wearing her tulle and velvet witch dress to sleep on a sweltering July night, beneath the ominous grin of a paper skeleton, perhaps she’s working through something — her fear of death, her fear of power, her fear of not having any control in this tumultuous world.

Kids can learn to take charge of their fear and see those situations are manageable.

“For the kids who love the occult or gross things, it’s a place for them to feel strong, to engage their imaginations in a way that feels empowering to them, endlessly fascinating or thrilling, and just generally a positive experience,” offers Tamar Chanksy, Ph.D., a psychologist and the author of Freeing Your Child from Anxiety. It’s normal, says Chansky, for kids to be afraid of some things and not others. “Parents can help their kids to fact check their fears with those triggers, and importantly, desensitize to them by doing ‘courage challenges,’ exposing themselves to pictures of spiders and dogs, learning about [vaccination] shots, pretending to give shots with a toy medical kit, et cetera, so kids can learn to take charge of their fear and see those situations are manageable.”

Kerr agrees. “I always like to remind parents and kids that the real gains or benefits that can come from engaging with scary things is when there is choice and agency — dragging kids or friends through haunted houses or scary movies when they don't want to is not a good idea. Shame, guilt, peer pressure, or embarrassment should never be the motivating factors, like a good coach, parents can encourage and support, but to feel the sense of courage and empowerment we need to feel like we decided to do it.”

After our epic haunted house fail, my daughter and I walked over to the ticket booth to check out the embarrassing photograph a robot-camera had snapped of us during the ride (which I find much more disturbing than the plastic skeletons that lunged from the walls). It knew was a keeper: my daughter screaming and digging her fingers into my arm while I stare at the top of her head wearing a lost and somewhat earnest expression.

I had the picture made into a magnet so it could live forever on our fridge. Every time my daughter races up to the image of her screaming her powerful scream, and proudly announces, “I went on the haunted house!” I’m glad I did.