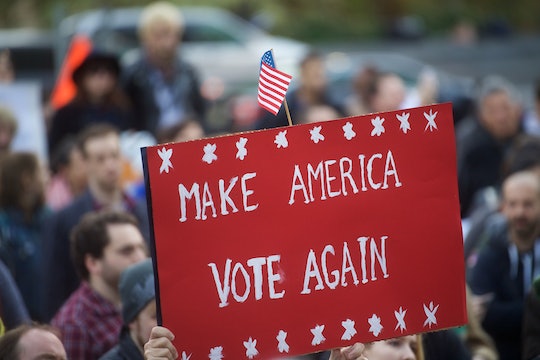 It hasn't even been a week since the election and its results that shocked large swaths of Americans, and still — protestors continue to take to the streets in their communities to protest against President-elect Donald Trump. Responses to Trump's presidential victory have spanned just about all the five stages of grief — most notably: denial, anger, and depression. Many of Trump's most ardent supporters — who praised the 70-year-old business tycoon's ability to "tell it like it is" on the campaign trail — are now telling those anti-Trump protesters to get over it, just like Republicans did when Obama won in 2008. But comparing Trump's election to 2008 is a fuzzy exercise in memory at best and a disturbing example of gaslighting at its worst.

When Obama became the first African-American president in the White House in 2008, there were plenty of voters at the time who were equally as troubled by an Obama presidency as those who fear a Trump presidency now. Even when Obama was reelected, opponents lashed out — including our very own president-elect: Trump called for a "revolution" when Obama retained the White House. Now, four years later and just two days after winning the election, Trump called protesters "unfair." Double standard much?

As for Trump supporters who feel that America did a much better job of keeping its cool after Obama's 2008 win — well, they'd just be wrong. There were anti-Obama protests, with sentiments calling for far more terrifying acts against then President-elect Obama when compared to the chants of "F*ck Trump!" heard at protests this past week. Let's take a trip down post-election memory lane, shall we?

The morning of the 2008 election, a noose was found hanging from a tree at Baylor University in Texas. By the end of the month, a Wichita pastor had put up a sign on his church calling Obama a Muslim and said that his victory was a "sin." In the two weeks after Obama's 2008 win, the Southern Poverty Law Center documented hundreds of hate crimes against minorities by Americans outraged that a black man could be President of the United States.

It didn't stop after Obama's first term, either: opponents have displayed empty chairs hanged from nooses — clearly evoking imagery of lynching — upon his reelection in 2012. At the University of Mississippi, an anti-Obama protest ended in arrests for disorderly conduct. Conservatives can't keep pointing the finger at progressives using their freedom of speech to protest Trump while turning a blind eye to their own actions in 2008 and 2012.

But this isn't solely about protests: Both the 2008 and 2016 elections have been extremely polarizing, with results that have shaken the very core of the "losing" side of voters. When Obama won in 2008, it was as much a wakeup call for Republicans and conservatives then as it is for progressives and Democrats now. On his radio show, conservative pundit Rush Limbaugh, elaborated at length about what Obama's victory meant for Republicans at the time:

Our side is asking us to be gracious and conciliatory and so forth — and frankly for me, folks, I am ready for battle. I am on the field. I have taken it. There is a golden opportunity here to rebuild the conservative movement. We got a lot of epic battles ahead. They will be energizing. They will be purposeful. They will be meaningful, and we will succeed.

As progressives are now trying to process Trump's win and what a Trump presidency means, Ruth Condiff, editor-in-chief for The Progressive, echoed a similar rallying cry for progressives — just as Limbaugh did for conservatives in 2008:

Republicans now control all branches of government. They cannot pretend to be outsiders anymore. The harm they can do is daunting. Democrats and progressives must unite in opposition, and figure out how to truly represent the better vision of America that we hold in common. We have no choice. Let’s get going.

The similarities between the reaction to Obama's victory in 2008 — and again 2012 — are striking when compared to the anti-Trump protests we're seeing now. But this time, Trump supporters would rather progressives and protesters limp away with their tails tucked between their legs. To these Trump supporters, I say: Stop telling protesters to "quit complaining." This isn't complaining. It's our First Amendment right to peacefully assemble — peace being the operative word, of course. But to tell protesters to clean up their act now is turning a blind eye to the actions of a nation just as stunned eight years ago.