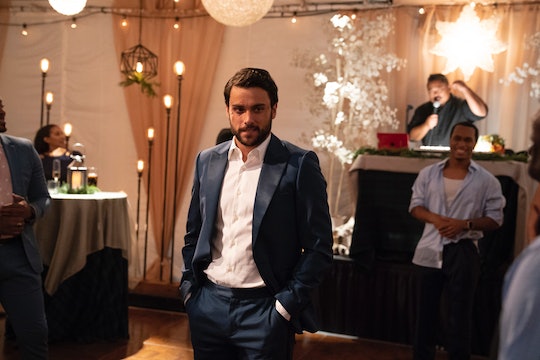 Is It Possible Connor Is Sam's Son On 'HTGAWM'?

Questions of paternity have been running rampant in Season 5 of How to Get Away with Murder. The sudden arrival of Gabriel Maddox has everyone wondering where he came from, but it's possible there's a greater shock hiding in plain sight. Or maybe not. Fans have begun to speculate that Connor's biological dad is actually Annalise's late husband, but there are a few simple reasons why Connor is definitely not Sam's kid on HTGAWM.

It seems this bit of speculation emerged after Connor became consumed with finding out why Annalise had selected him for her team in the first place. It didn't appear to be entirely academically motivated — Laurel's and Asher's parents influenced Annalise's decision, so perhaps there was a secret about Connor's heritage that motivated her to bring him into the group.

And it's easy to see why this feels plausible. Everyone's waiting to see who Gabriel's parents are, but he could be a red herring meant to distract from the true reveal of Connor's shocking background. HTGAWM is a soap opera at its heart, so its viewers are primed for wild plot turns. But despite all that, Connor is most definitely not Sam's kid, and here's why.

The theory about Connor being Sam's kid seems to have emerged as a twist on a few other popular theories floating around. Everyone knows Bonnie's biological son is out there somewhere, even if his identity is unknown. Many assumed it was Gabriel, but when that felt too obvious people began to wonder if the show was focusing on Gabriel so intensely because he was actually Sam's son, the product of an affair he may have had.

That left the position of Bonnie's kid wide open. Connor was there and around the right age, so he appeared to be a plausible guess. Then, like Gabriel, when that felt a little too obvious or unlikely, he was pivoted into maybe being Sam's Potential Lovechild Who Might Not Even Be A Thing, Because No One On The Show Has Ever Mentioned It.

That makes sense when tracing how the theory emerged, but it's not actually proof. There isn't any evidence that Connor is connected to Sam in a concrete way, or that his parents aren't his biological parents. His mom and dad have both appeared on the show, with no reference to Connor being adopted, or having a different bio dad. It might be fun, soapy drama for Connor to be Sam's secret kid, but it's been pretty much pulled out of thin air.

The explanation for Annalise's interest in Connor doesn't have to be so deep. Perhaps she merely identified with him; they both have an interest in social justice, and in the early days Connor shared her cutthroat ambition. There may be a lot of dark secrets being dug up on HTGAWM, but usually there's some narrative clues before the reveal. Bonnie having a child was hinted at because of her abuse and certain things she'd said during Annalise's pregnancy that made it seem like she'd been through it herself. Laurel's family dynamics were alluded to for seasons before they were fully explored. Viewers knew there was more to Wes from day one.

It's tempting to spin all kinds of speculation into new, unexpected directions, but sometimes there's just no foundation for a theory.