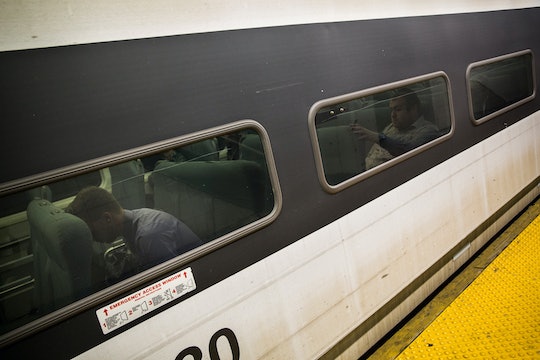 Why Couldn't The New Jersey Train Stop? Passengers Say The Train Was At "Full Speed"

A commuter train has crashed into the Hoboken train station, causing scores of injuries. Why didn't the New Jersey train stop? Investigators were working to figure out what went to so horribly wrong during Thursday morning's commute, but said they believe it was an accident.

Both passengers on the train and at the station reported seeing the train traveling at what looked like full speed without slowing down at all as it approached the Hoboken station.

One of the passengers on the train said just before the crash it, "just felt like it never stopped," CNBC reported they said. "It didn't slow down. It didn't brake." Passenger Nancy Bido told WNBC-TV in New York that it didn't seem like the train slowed down at all before crashing into the Hoboken station. "It just never stopped. It was going really fast and the terminal was basically the brake for the train,” Bido said, according to CBS News.

And it looked the same from the station side of the crash. Radio host John Minko saw the crash and told CBS that "it simply did not stop," he said. "It went right through the barriers and into the reception area."

Now investigators from the National Transportation Safety Board and the Federal Railroad Administration are investigating what could have caused the crash, CBS reported.

The NJ transit spokeswoman told the Los Angeles Times she doesn't know how fast the train was going when it derailed. But NBC New York is reporting that five different law enforcement officials have said the preliminary evidence points to the crash being caused by operator error.

So far more than 100 have been reported injured, some critically, and at least three are dead. Here's incredible video taken just moments after the crash showing both the extent of the damage and the disbelief of bystanders who witnessed it.

According to ABC News, the train was running late. There's no word yet if that contributed to the crash, however, but it might be an explanation for why the conductor would have run the train faster than usual.

According to ABC News:

The train on NJ Transit's Pascack Valley line started in Spring Valley, New York, at 7:23 a.m. ET with a scheduled arrival time in Hoboken of 8:38 a.m. It struck the terminal building on track 5 at approximately 8:45 a.m, according to NJ Transit.

While rescue crews and investigators do their work, the Hoboken train station is closed until further notice. But the New Jersey transit system is telling its stranded passengers that New Jersey Transit buses will transfer passengers between Hoboken and New York City.

"There is heavy structural damage to the terminal, which is why it was evacuated," Jennifer Nelson, director of media relations for NJ Transit, told ABC News. "It is not safe to go in there right now.”

Here's the official statement from NJ Transit on the incident:

For the rest of the day, it's important for locals to stay off the roads surrounding the station so that first responders have clear and easy passage to get in and help the dozens of people injured and the many people still trapped in the train.