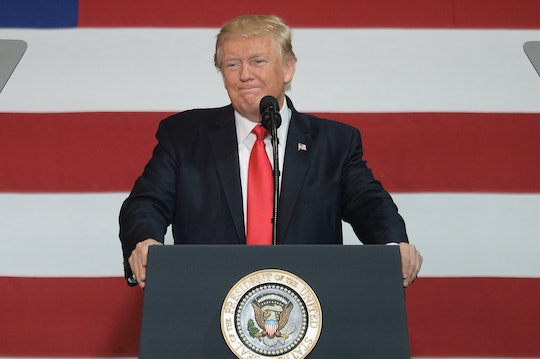 FYI, You Could Now Pay More For Other People's Health Care

If there's one thing President Donald Trump hates, it's Obamacare. Like many Republicans, the president has held a strong negative opinion about President Obama's namesake legislation, also know as the Affordable Care Act (ACA), for years now. And on the campaign trail, he often vowed to do away with it. However, after more than one attempt to repeal and replace Obamacare failed in both the House of Representatives and the Senate, it began to seem like Trump might never accomplish his goal. Until now. On Thursday, the Trump administration announced that it would be decreasing costs associated with the ACA, including enrollment programs. But, in reality, cutting ACA enrollment programs will cost taxpayers even more.

This latest move by the Trump administration means that the government will sharply decrease its spending on ACA awareness. According to Vox, the Trump administration will cut advertising spending from $100 million down to a mere $10 million, and "cut the budget for the in-person enrollment program by 41 percent." Now, this may seem like a welcome reprieve for fiscal conservatives who blame Obamacare for their own rising health care costs, but that isn't the case. On the contrary, these ACA cuts will actually make it more expensive for taxpayers, which might be just what the administration is counting on.

Basically, cutting outreach costs for the ACA ensures that fewer people will enroll in the program. So, not only will this mean more uninsured Americans, but when those uninsured Americans need medical attention, that bill will become taxpayers' responsibility. Obviously, this isn't a good solution. But here's why the White House might view it as such: when taxpayers start having to pay more for someone else's care, they might blame Obamacare as a whole, giving legislators more leverage to repeal and replace the ACA.

Whether this is an incredibly smart or ignorant (or both) move by the Trump administration is left to be seen. However, what is known is that much of this latest decision was reportedly not even based on research. In fact, according to Vox, "Officials said they had not done any studies of the efficacy of enrollment advertising or whether public awareness is indeed quite high," despite previous claims that, "People are aware of Obamacare and the exchanges, they are aware they can sign up,” as one Health and Human Services official said.

How this will all play out remains to be seen, but this latest move by the Trump administration could put many people at risk of not getting proper health insurance while raising the costs for those who are insured. And if either of those outcomes is even a possibility, it's not OK.