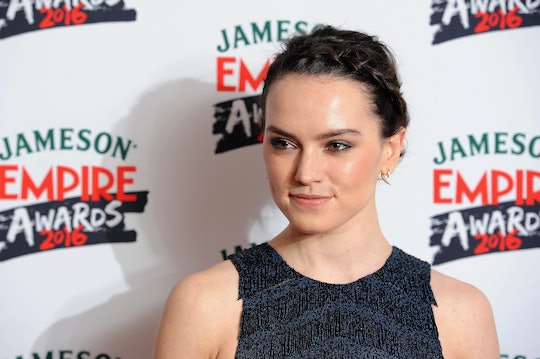 Why Daisy Ridley's PCOS Instagram Means So Much To Me

I already liked actress Daisy Ridley. Her performance as Rey in Star Wars: The Force Awakens is inspiring. Her character is fierce; she's a woman who is not going to back down to any man. And she is just as capable as they are, so why would she? Recently, Daisy did something that has made me adore her even more. She posted a picture of herself on Instagram, t-shirt clad, face covered in pasty cream — the realest image of a celebrity I have seen in a while. And even realer was the fact that Daisy Ridley posted on Instagram about life with Endometriosis and Polycystic Ovary Syndrome (PCOS). She offered up a personal take on her personal struggles, and as someone who also has PCOS, it mattered to me because I know what she's gone through.

At 15 I was diagnosed with endometriosis. One laparoscopy, many consultations and 8 years down the line, pain was back (more mild this time!) and my skin was THE WORST. I've tried everything: products, antibiotics, more products, more antibiotics) and all that did was left my body in a bit of a mess. Finally found out I have polycycstic ovaries and that's why it's bad. I can safely say feeling so self conscious has left my confidence in tatters. I hate wearing make up but I currently don't want to leave the house without it on. HOWEVER PROGRESS IS BEING MADE! (With some help from a dermatologist and cutting out dairy (waah, except for spontaneous ice creams) and cutting down sugar (bigger waah but gotta do what you've gotta do)). Finally. Finally. (Throughout all this I've only had people being wonderful and encouraging and occasionally making me realise I'm being ridiculous and there's more to life)... My point is, to any of you who are suffering with anything, go to a doctor; pay for a specialist; get your hormones tested, get allergy testing; keep on top of how your body is feeling and don't worry about sounding like a hypochondriac. From your head to the tips of your toes we only have one body, let us all make sure ours our working in tip top condition, and take help if it's needed. #wasthispostlongenough #maybethesehashtagscanbulkitupabit #alsohowmanybracketsdoesonewomanneed #ifyourereadingthisiapplaudyou #thisisaclaymaskincaseyourewondering

I was 13 when I started missing my period. I'd had one regularly since I was 9. Even though 9 is early for a menses, my body developed like it was in a rush. In fourth grade gym class, I felt something wet and hot roll down my leg while waiting my turn during kick-ball. I was the only child in elementary school to carry pads in her book-bag. So, when my period all of sudden disappeared, my mother reasonably freaked out.

I wasn't diagnosed with PCOS that early on. In 1993, it wasn't such a widely known disease and I was in the middle of the expected age range when an "average girl" hits puberty, which used to be between 16 and 17 years old but, according to research collected from the Environmental Health Perspectives, the average age for a girl to get her period was 12 years old. So, the acne, the weight gain, the body hair — we thought they were all signs of the normal hormone shifts most people go through during that stage in life. The gynecologist my mother took me to couldn't diagnose a problem, but knew birth control would regulate my period.

In the unforgiving light of a sterile examination room, the doctor put it bluntly: "It'll be very difficult for you to have children."

From 13 all throughout college I stayed on birth control and maintained what I felt was a reasonable weight. I still battled issues with acne and facial hair, but I didn't t think it was odd. Didn't every woman have to pluck and shave her face daily? It wasn't until I stopped using my birth control, and my periods disappeared again, that I was finally diagnosed with PCOS. In the unforgiving light of a sterile examination room, the doctor put it bluntly: "It'll be very difficult for you to have children."

The way PCOS was explained to me lead me to believe that I'd eventually turn into a hair-covered (yet balding), pock-faced, obese, barren monster. Before I was ready to have children, I didn't worry about the infertility part of the disease as much because the daily struggle to feel feminine really messed with my self-esteem. I felt ugly, fat, hairy, and undesirable. I had a secret life, one where I spent hours removing hair from my face, popping zits, and never knowing whether or not I was going to get my period. The thought of having children in those moments was so far removed from my mind. I'd tackle that bridge when — if — I got there.

PCOS is difficult to treat. There's no one pill you can take to cure all the symptoms, and each individual symptom has to be tackled on its own in order to keep the disease manageable. Treating PCOS is expensive and time consuming. You have to start with one symptom and work down a checklist from there. To control my acne, I started seeing a dermatologist, and he prescribed an expensive acne cream I stopped using when I felt my skin had cleared up reasonably enough. Now, I drink water, use a tea tree face wash I bought from a convenience store, and make sure not to pick at any pimples that do pop up.

This reality is yet another reason why Daisy Ridley's Instagram post meant so much to me. Her honestly was reminded me that I need to get back to taking care of myself. I've gone way too long being comfortable with this disease and what it does to my body.

I received several laser hair removal treatments in my 20s, before I had children and could afford the expensive service. The treatments permanently removed the hair from the sides of my face, but as I get older, hair is beginning to sprout on my chin more frequently that I can keep up. To be honest, I'm hoping to start a new round of laser treatments in the near future.

But the hardest part of having PCOS by far has been my struggle to maintain my weight. Before I had children, I had more time on my hands to go to the gym regularly. My doctor prescribed me a Metformin, diabetic drug known to help with insulin resistance issues in people with PCOS, and the drug, combined with exercise and a low carbohydrate diet, allowed me to lose a significant amount of weight. I went from 230 pounds to 175. I fluctuated between 175 and 200 for several years, but as long as I took the medication, ate less sugar, and exercised, I was able to control my weight to a certain degree.

When I got married and my husband and I decided we wanted children, we knew it was going to be difficult. After a year of trying and not conceiving, we finally went to a fertility specialist. She increased my daily dosage of medications and also prescribed Clomid, a drug designed to boost egg production. After several months, and after almost giving up a few times, I finally got pregnant. I count myself lucky because I don't think it would've been possible had I not been taking the medication and exercise.

It has been four years since I gave birth to my sons and my weight has ballooned back up towards that 230 mark. I am busier now and it's hard to spend as much time focusing on maintaining this disease like I used to. This reality is yet another reason why Daisy Ridley's Instagram post meant so much to me. Her honestly was reminded me that I need to get back to taking care of myself. I've gone way too long being comfortable with this disease and what it does to my body. It is not as though I haven't tried to lose weight since I had my boys, but it is harder for me to see results. At some point down the line, I forgot the reason why it is so difficult, but Ridley's Instagram reminds me: I am living with PCOS. Instead of taking my medication and working harder, I find myself slipping into what's easy and what's more comfortable. But, I know the long-term effects of wallowing in that comfort: diabetes, heart disease, and other potentially life threatening medical problems.

So, I want to thank Daisy Ridley for sparking a renewed desire to get my PCOS back in check. I needed the reminder that I am worth the hard work.

More Like This
Keep Talking To Your Kids About Abortion — It's More Important Than Ever
Ginger Zee Had A Perfect Response After A Troll Asked Her "Who's Raising Your Kids?"
Everything You Need To Know About Colostrum Harvesting
Turns Out, You Can Dilate Pretty Far Before You Actually Go Into Labor