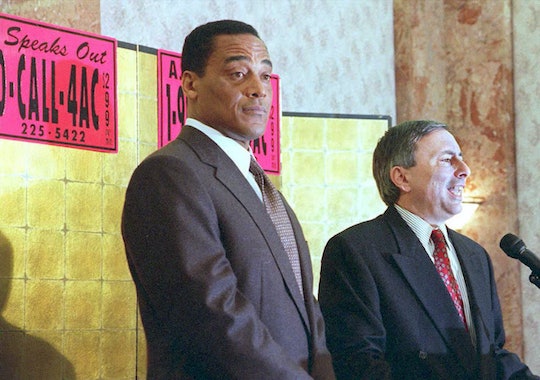 Why Did A.C. Cowlings Help O.J. Simpson? The Two Were Friends For Years

The FX mini-series American Crime Story has pretty much captivated audiences who are into reliving the trial of O.J. Simpson. For those of us who are old enough to have watched the trial in real time, the show's retelling of of the Trial of the Century has many rethinking some of the finer points of the trial. Everyone remembers the Bronco car chase. But how many viewers forgot that it was Simpson's longtime friend who drove that SUV up and down Los Angeles freeways? And why did A.C. Cowlings help Simpson that day anyway?

Al Cowlings, who is often called by his nickname, A.C., grew up with Simpson. They played high school and college football together, in addition to being teammates in the NFL when they both played with the Buffalo Bills and the San Francisco 49ers together. While their football careers took different turns, A.C. is still most well known for owning the white Ford Bronco in which he allegedly transported Simpson while the suspected murderer reportedly held a gun to his head.

Cowlings, played by Malcolm Jamal Warner on the FX series, was arrested on suspicion of aiding a fugitive on the same day as Simpson's surrender, but prosecutor's never charged him, according to the Los Angeles Times.

The white Bronco and the car chase was always a reference point leading up to and during the trial. Allegedly, Simpson had a rented white Bronco in his driveway, but the one America remembers watching was Cowlings', which he later sold because he just couldn't "drive it anymore," according to the Associated Press. Cowlings has consistently had nothing to say about the chase or his friend's trial, even up to this day. He reportedly "despises" the media and is not thrilled about being portrayed in the FX miniseries, according to gossip site TMZ.

In A.C.'s defense, that's likely because he was actually Simpson's best friend. They grew up together in the same neighborhood, Potrero Hill in San Francisco, and were even members of the same street gang. According to the L.A. Times reports from the days of the trial, Cowlings and Simpson were like brothers and A.C. would have done anything for his friend.

At the time of the car chase, former Los Angeles Rams General Manager Don Klosterman told the Los Angeles paper that, "if O.J. could depend on one guy, it was A.C." He added that "there was total loyalty." Cowlings' lawyer at the time, Donald M. Re, said that his client's main motivation was allegedly to prevent Simpson from killing himself, according to the Chicago Tribune.

While no one knows exactly happened in that car that day, the fact that Cowlings was helping his longtime friend has never been called into question. Even if he doesn't watch the show, A.C. might be happy to know that his loyalty has never been doubted.