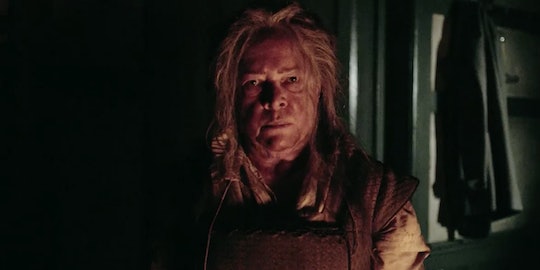 Why Did Agnes Kill Sidney On ‘AHS: Roanoke’? She's Having Some Sort Of Breakdown

One of the best parts of the big Episode 6 American Horror Story: Roanoke twist was meeting all of the "new" characters. Sarah Paulson's Audrey, Evan Peters' Rory, and Angela Bassett's Monet were all fun new additions to the cast, and it was amazing to watch the actors totally flip their personas midway through the season. But by far the most startling reveal was that Kathy Bates' "real" character, Agnes Mary Winstead, was just as bloodthirsty as the villainous character she played in the "My Roanoke Nightmare" re-enactments. But why did Agnes kill Sidney on American Horror Story: Roanoke?

When we met Agnes in Episode 6, she initially seemed like a sweet older lady – albeit one a little bit too involved with the role she was playing. It was quickly revealed that, not only was Agnes completely obsessed with The Butcher, she was very clearly mentally unstable. Diagnosed with schizoaffective disorder after attacking Hollywood tourists in the persona of the deranged Tomasyn White, things only got worse once Sid baited Agnes by dangling a restraining order against her, forbidding her to come near the house. Of course, that went exactly as Sidney had hoped – it only enraged her and got her that much more obsessed with being part of the show. We next saw her stalking around the Roanoke house, freaking out Rory and Audrey.

As if that wasn't bad enough, the situation escalated SUPER quickly on "Chapter 7." In the span of a few collected minutes of screen time, Agnes went from a pitiable woman suffering from a mental illness to a legitimate mass murderer.

Shocking us all, Agnes appeared seemingly out of nowhere, meat clever in hand, brutally killing off Sidney and his production crew. (RIP, Sidney, we hardly knew ye!) AHS is definitely not shy about killing off their major characters this season.

Of course, fans weren't exactly weeping over Sidney's demise. In the one episode that we got to know him in, he was a very unlikeable dude and a borderline caricature of a fame-hungry reality show producer who would do literally anything for ratings, no matter how immoral.

While Agnes isn't exactly in the clearest state of mind to be espousing firm motives, it's obvious that her sudden killing spree was spurred on by two things. One was her already-fragile mental state, which we saw when Agnes quickly turned on The Butcher persona and started yelling at Sid and Diana. The second was Sid threatening her with the restraining order in "Chapter 6" and telling her that she'd never be on the show again.

In the end, Agnes' motives didn't matter all that much – when the real Butcher arrived, Roanoke ghostly followers in tow, it was the end of the line for the actress who claimed that all she wanted was to be on TV.