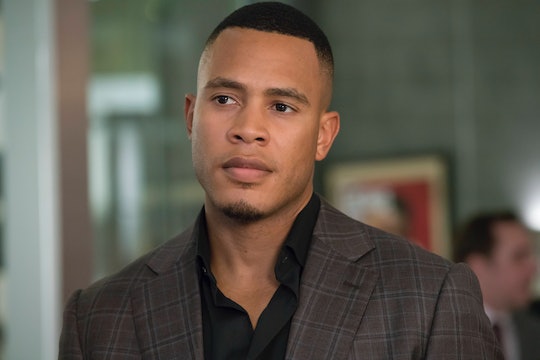 Why Did Andre Hack Empire? He Wants To Be In Power

Wednesday's episode of Empire touched upon one of the scariest news stories we've seen time and time again this year: hacking. From the jump, something funky was going on at Empire Records. At first, one of Tiana's demo songs autoplayed on everyone's phone and computer. From then the hack only got more and more sinister. Lucious initially believed this was one of his known adversaries, such as Shyne Johnson. As the episode closed, however, we saw who the hacker really was – and it wasn't who anyone guessed. Why did Andre hack Empire? It may have to do with his thirst for power.

Emails from all Empire employees – including their lawyers and musicians – were rapidly leaked to the public. Not only that, but a nude photo Cookie sent to her new guy Angelo was released to the world. Lucious was of course furious, and quickly tried to solve this mystery...and also fire any of his employees who complained about him in their emails, but that's another issue. He confronted Shyne, played to perfection by rapper Xzibit, but he quickly made a case for himself: he's not an "Internet thug."

Not even the computer experts Lucious hired could figure out who was behind the hack. They did, however, lead to a clue: a USB found in one of the recording studios; the hack was definitely coming from inside the office. In the last scene, it was confirmed one of Empire's own: Andre. He gave music mogul Vaughn, played by rapper French Montana, a duffel bag full of money while boasting how well the hack went.

This all went down in an abandoned warehouse – with Nessa watching. Andre took her so she could see the exchange between Andre and Vaughn. Why did Andre do this? Well, he's been wanting to inherit Empire since the show began, so it's likely this has to do with his ambition. It seems that he doesn't care about hurting his family in the process. This is also exemplified by his behavior with Nessa. Andre and Hakeem are in a "battle" for her – which is a bit ridiculous, seeing as Andre's wife Rhonda just died and Hakeem becomes infatuated with any woman he interacts with. Regardless, this was Andre's way of coming out on top.

Unfortunately we'll have to wait until after Thanksgiving to see how this unfolds, but it's practically guaranteed that the Lyons will find out about this soon. Lucious will likely be furious, even if Andre pulled a very Lucious-esque move. By pulling this hack, and valuing power over family, Andre proved he's more like Lucious than he lets on.