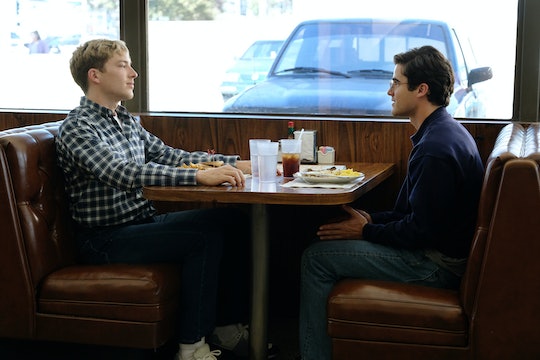 When it comes to the crimes of Andrew Cunanan, there aren't many answers available. Cunanan killed himself before police could arrest him, leaving his motives uncertain and confusing. Each of his five reported murders seem inexplicable for different reasons: Why kill a famous designer? Why kill a stranger? Why kill someone you claimed to love? When trying to figure out why Andrew Cunanan killed David Madson, it's impossible to come to a concrete conclusion.

David Madson, an architect, was Andrew Cunanan's ex-boyfriend, though most of their relationship was long-distance because they lived in different states (Madson in Minnesota and Cunanan in California). According to Vanity Fair, Cunanan would refer to Madson as "the man of my dreams, the man I want to marry" when talking about their relationship with friends. But Cunanan was also lying to Madson throughout their relationship, as he reportedly lied to most people. Cunanan was known to obfuscate the details of his life and how he made his money, with one acquaintance describing him as "a bulls*it artist, a compulsive liar" to the NY Daily News.

Eventually Madson and Cunanan broke up, but that wasn't the event that caused Cunanan to snap. They remained friendly and Cunanan would often travel from San Diego to Minneapolis to visit or apartment-sit for Madson, as Maureen Orth reported in her book Vulgar Favors. In fact, there doesn't seem to be one specific instance that set off Cunanan's crime spree.

In late April 1997 (two years after Madson and Cunanan met and around a year since they had been romantically involved), Cunanan came to stay with Madson for the weekend. He was also planning to visit his friend Jeff Trail. Both Madson and Trail would become Cunanan's victims, the crimes inextricably linked because of their proximity. Cunanan killed Trail in Madson's apartment, stayed there with Madson for an estimated two days, and then fled; six days later, Madson's body was found in East Rush Lake. He was shot three times with Trail's gun.

Cunanan had visited Minneapolis for a weekend many, many times before, which makes it difficult to comprehend what made this weekend different. Vulgar Favors indicated that Cunanan's life had been falling apart leading up to the murders: his relationships were souring, he was running out of money, he felt self-conscious about the way he looked. Maybe everything had been building for him and when he finally realized he had no chance with Madson in the future, he ended things in the most permanent way possible, though this is just pure speculation.

There's also a chance that there was an element of necessity to the crime. Trail was killed in Madson's apartment, but it's impossible to say whether Madson was there at the time, came in while it was happening, or only stumbled upon the aftermath. If Madson was a witness to the crime, it's possible that Cunanan killed him to avoid Madson alerting police or implicating him.

Harper's Bazaar shared a theory, common at the time the murders occurred, that Cunanan believed he had contracted HIV and this led to his spree. Apparently a San Diego AIDS counselor named Mike Dudley who knew Cunanan told Time that Cunanan had spoken with him about AIDS. He recalled Cunanan saying, "If I find out who did this to me, I'm gonna get them!" However, Cunanan's autopsy proved that he was HIV negative.

Again, I must stress that this is all speculation. The only men who could say for sure what happened are all gone. There were several days in between Trail's death and Madson's; curious parties can theorize endlessly about what happened during that time, but no one will ever really know. The Assassination of Gianni Versace may explore the possibilities, but at the end of the day it is a fictionalized retelling of real events — emphasis on fictionalized.