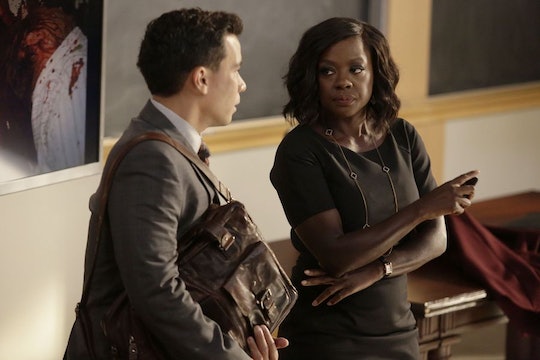 Why Did Annalise Give Oliver A Phone On 'How To Get Away With Murder'?

Things became a bit more clear on the second episode of the third season of How to Get Away With Murder. As promised, each episode will reveal one person close to Annalise that is in fact alive (and not in the body bag) — and on this episode it was Oliver. But, the big reveal wasn't really that Oliver was alive (he's cool, but not crucial), instead, the reveal was that Annalise is using him for some last minute cover-up. So, why did Annalise give Oliver a phone on HTGAWM? She's clearly hiding something, and I wouldn't be surprised if it involved the person in the body bag.

While I'm happy to see that Oliver is alive — he's never really been a bad guy so to say — his alive-ness was a bit underwhelming considering the fact that the Keating 5 are still MIA in the fire scene outside Annalise's house. Can we get eyes on Connor? Then I'll be able to sleep a little better. What truly ended up being the "takeaway" from the scene, though, was the fact that Oliver was asked to "wipe clean" a phone that Annalise gave him (read: snuck him) before being cuffed and arrested.

But, why did Annalise ask him to wipe a random phone? Well, we know that Annalise has become a fan of hiding phones lately. Earlier in the episode (and two months before the house fire), Annalise called the private investigator for an update on Frank's whereabouts, when she overheard Frank kill the guy! Her instinct was to put the burner phone in her drawer and slam it shut — as one does to just forget it happened.

Could this phone be as incriminating as the drawer phone? Could they possibly be the same phone? There's no doubt that Annalise has a lot of secrets to hide, and her involvement in the house fire (and someone's death) could just be one more to add to the very long, exhausting list. Then again, if that body bag contains someone close to Annalise, do we really think she has officially resorted to killing one of her own? That's cold, even for her.

Oliver's involvement is interesting, since he's really just coming into his own now on the show since joining Annalise's forces. He's become her go-to illegal guy, and now that we know he is alive (and not on the ground crumbled up in a ball of wallowing) we can maybe assume that the body bag isn't Connor? Wishful thinking, I know, but I'd just like to think it, OK?