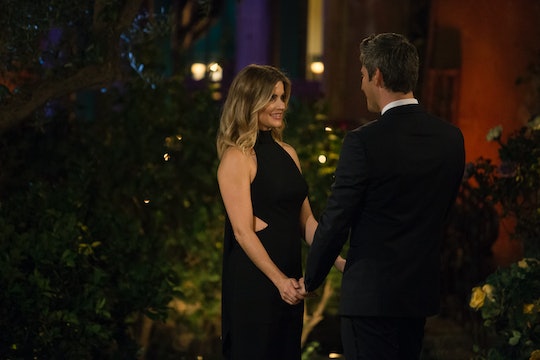 Another Bachelor season has officially begun, which means fans can obsess over Arie Luyendyk Jr.'s decisions for the next few months. First up is who he chose to give the first impression rose to. Why did Arie give Chelsea Roy the First Impression Rose on The Bachelor? While it's not for certain, the First Impression Rose can indicate that the contestant will go far in the competition, so this may definitely work in Chelsea's favor.

Just take last year's season, for example: On Nick Viall's Bachelor season, he gave his First Impression Rose to Rachel Lindsay and she ended up in third place. Want even more proof? Rachel herself gave her first impression rose to Bryan Abasolo and guess what? He ended up being the one to get down on one knee. So the fact that Chelsea got the rose is kind of a big deal.

So who is Chelsea, the woman who got the coveted First Impression Rose? According to Chelsea's ABC biography, she's a 29-year-old real estate executive assistant from Maine. Her biggest date fear is dead silence, and her pet peeve is over-the-top PDA. From her introduction package during the premiere, viewers learned that she is a single mother and was overjoyed that Arie was the Bachelor this year. That's because he was on Emily Maynard's Bachelorette season, and she was a single mother at the time as well. Arie didn't hesitate to fall in love with Emily because of her child, and it's safe to assume that'd be the case with other single parents.

I think it's amazing that Chelsea is raising a child and wants to win Arie's heart to boot, but it seems to me that her narrative (aka producers' edit) is being this season's "villain." For those who need a refresher or who have just become members of Bachelor Nation, typically Bachelor seasons have one woman that the others do not like, and who cause "drama." Ben Higgin's season had Olivia Caridi and Nick's had Corinne Olympios, for example. Of course, this is reality TV and not some observational documentary, which means that everything is heavily edited and viewers are made to feel certain ways — so take "villains" with a grain of salt. Regardless, Chelsea definitely upset some contestants the first night because she went to talk to Arie twice when others just wanted a few moments with him.

The fact that Chelsea went back to talk to him didn't fare well with the contestants, but earned bonus points for Arie. Chelsea didn't tell him a lot about herself (like that she's a mother, for example), which piqued his interest. He ended up giving Chelsea the First Impression Rose because he wants to learn more about her. He finds her mysterious nature interesting, and merely wants to get to know her better. Oh, and it doesn't hurt that the Kissing Bandit (Arie) "stole" a kiss early on in the night.

The First Impression Rose doesn't set anything in stone; the contestant is safe the first night, but after that they're equal to everyone else. It could be an indicator, though, that the lead is very interested in them from the start and that could remain true for the rest of the season. The 2017 cycle proves that with Rachel and Bryan; it's also interesting that while Rachel didn't win, she earned the title of Bachelorette. Could either a win or lead status be in Chelsea's future? There's no way of knowing as of yet, but the rose is a good sign that Arie wants to keep her around for a bit. This is all fueling the other contestants' annoyance of Chelsea, but even she said she didn't care. She'll wear that First Impression Rose with pride.